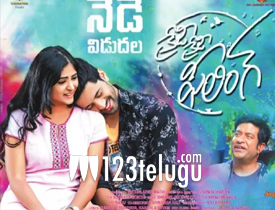 Along with 118, yet another straight Telugu film called Crazy Crazy Feeling is also out for the public viewing today. Let’s see how far it impresses us.

Abhi(Vishwanath) falls for a girl called Spandana(Pallak Lalwani) and tries to woo her. After repeat trails, Spandana finally says yes to Abhi’s proposal. When everything seems to be going fine in their love life, a small argument leads to their breakup. What is the reason for their breakup? How will they reunite finally? To know this, you have to catch the film in the theaters near you.

Hero Vishwanath improved a lot when compared to his first film Kerintha. He showed ease in both his dialogue delivery and physical appearance. Heroine Pallak Lalwani is cute and provides the required skin show for the youth.

Comedian Vennela Kishore’s funny track is refreshing in the film proceedings. As usual, the star comedian convincingly evokes good laughs with his typical dialogue delivery. Fidaa fame, Sanjana, as heroine’s sister and the young lady who portrayed the hero’s sister role are apt in the give roles.

Senior artist Suman did justice to the given respectable role. A small-time artist’s funny dialogues in the first half are nice. A few romantic scenes between the lead pair in both the halves will attract the targeted audience.

Story-wise, the film has nothing new to offer which is a major drawback. The breakup scene between the lead pair is not executed in a proper manner.

The first fifteen minutes of the film runs on a flat note with a lackluster narration until Vennela Kishore’s character enters the scene. The climax patch up scenes between the lead couple should have been narrated in a more gripping manner.

Looks like director Sanjai Kartik has prepared the script by keeping youth audience in mind. In that aspect, he succeeded to an extent. But he should have focused more on writing a fresh storyline for better output. Most of the dialogues are aimed at today’s youth and reflects their mindset. Editing work is okay. The cinematography is good as the film’s texture is colorful. Music by Bheems Ceciroleo is nice as two songs are good both audio and video wise. Production values for this low budget film are impressive.

On the whole, Crazy Crazy Feeling is routine romantic drama which has a strict few good moments. Some romantic scenes between the lead pair and Vennela Kishore’s comedy provide the needed fun for the youth. But the routine storyline and lack of freshness in the narration may not go well with everyone. All we suggest is to keep your expectations low and watch it if you have enough time on your hands.