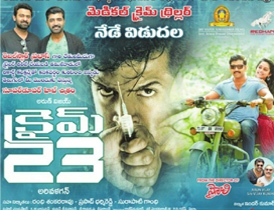 Arun Vijay’s hit Tamil film, Kuttram 23 has been dubbed in Telugu as Crime 23. Touted to be an investigative crime thriller, this film has hit the screens today. Let’s see whether it impresses us or not.

The film takes off with the suspicious murders of a Church father and pregnant women named Jessica. The case is handed over to Assistant Commissioner of police Vijay(Arun Vijay). As Vijay digs deep into the case, he comes to know that both the murders have a connection with the high-profile medical mafia. Who are these medical mafia? Why are they targeting pregnant ladies? and how does Vijay solve the case is the rest of the story.

Arun Vijay looks sharp as the aggressive cop. His body language and good screen presence bring a lot of depth to the proceedings. Young starlet, Mahima Nambiar is cute with her captivating girl-next-door looks. She has also performed quite well in the role of an independent working woman.

Noted actress, Abhinaya’s role is key to the film and she gave a decent performance as well. The interval twist is good and sets up the stage for interesting proceedings in the latter half. The medical mafia which runs the medical industry has been showcased nicely by pointing out the real hidden agenda behind fertility centers and how they work.

Though the film deals with an interesting point, the slow pace can be termed as one of the biggest minuses. If the proceedings were showcased in a more gripping and crisp manner, the result would have been even better.

As the film is completely serious, all those who look for entertainment will be disappointed. There are a few good situations where the director had a chance to step up the pace of the film but he takes his own time and slides the film down in the later part.

Director Arivazhagan should be appreciated for dealing a sensitive issue like the medical mafia. His idea is good but if he would have focused on projecting the film in a more commercial manner, the response would have been better. Cinematography by Bhaskaran K. M is good and apt for its genre. Editing by Bhuvan Srinivasan is decent as he summarized the film with a crisp runtime. Music by Vishal Chandrasekhar is good, especially his background score carries the film’s mood nicely. Production values for this limited budget film are good.

On the whole, Crime 23 is an investigative thriller which deals with grey shades in the medical system. The mood of the film is good but the slow pace makes matters irritating most of the time. This film is strictly for all those who have an eye for dark thrillers. Watch it only if you have noting else to do this weekend.