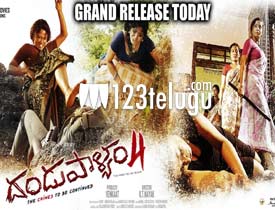 Dandupalayam 4 is a film that has made its way to the silver screens today. Let’s see how it is.

Sundari(Suman Ranganathan) is a dreaded criminal who runs a gang of eight people. Her only motto is to torture people and grab money, ornaments, and other precious things for their own purposes. They become quite dreaded in their areas that everybody gets scared of them. So, to nab them, a special officer named Ashok Kuma is appointed. The rest of the story is as to how Ashok nabs this gang and puts them behind the bars.

Suman Ranganathan is the star of the film and does a superb job in her negative role. The way she behaves in a negative manner and mouth those dialogues have been captured well. The rest of the gang members were also spot on and gave their best.

One can say that the performances in the film are the sole highlight. Senior actor Benarjee was decent in his supporting role. An item song featuring Mumaith Khan in the second half is good. The locations chosen are very realistic and bring a new dimension to the film.

The crimes showcased in the film are quite repetitive and nothing new. Also, the rapes and crime showed are too vulgar and hard to digest by a section of the audience.

The same concept has been dragged with a fresh narration but the basic theme is the same and old. So much crime is happening in the film and the cops find it very hard to nab these criminals even after having technology and plan looks a bit over the top.

The previous parts had Ravi Kale, Pooja Gandhi, and Makrand Deshpande but all of them are missing and this is a big letdown for this part.

The camerawork in the film is neat as the rustic locales have been showcased well. Music and BGM by Anand Raj are too harsh on the ears. Editing is pathetic and so were the dialogues. Coming to the director K T Naik, he has done a very ordinary job with the film. He kills the second half with logicless scenes and makes the film boring and bland. His screenplay also goes for a toss as the film is not at all gripping.

On the whole, Dandupalayam 4 fails to live up to all its expectations. The same crime scene and violence has been doubled in this part which is hard to digest and does not impress you one bit. Except for some realistic performances, this film is a big letdown from its previous parts and can be ignored safely this weekend.