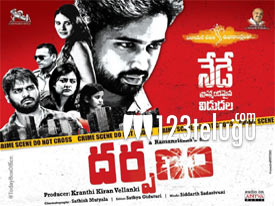 Among all the films released today, Darpanam is a murder mystery which has a decent premise. Read on to see if the film has anything interesting in store for us.

Karthik(Tanishq Reddy) is a roadside Romeo who involves in small-time robberies with his friends. One fine day, he along with his friends enters a bungalow. To his shock, he finds the bodies of Shravya(Subhangi Panth) and her family. As time passes by Karthik falls in love with Madhumati. But to their shock, the evil spirit of Shravya appears all of a sudden and locks the couple in the same bungalow. Rest of the story is as to how Karthik saves himself from the evil spirit.

The horror elements showcased in this film are just about okay. Tanishq Reddy is the best of the lot and carries the entire film on his shoulders. His performance was especially good in the climax. The best part of the film was the pre-climax episode which has been executed well.

The main heroine Alexius Macleod looks stunning and also did her role well. Subhangi Panth proves a good eye candy for the audience with her glamor. The guys who acted as hero’s friends have also done well in their parts. The whole horror-thriller set up looks good.

The script of the film is quite weak and does not have anything new to showcase at all. The script had good scope for all the needed commercial aspects but the makers failed to make use of it. The comedy showcased gets irritated after a point as many scenes get repeated time and again.

Also, horror showcased is ages old. There are so many scenes which divert the film in many areas. The climax of the film is also wrapped up in a hurry and does not look convincing at all.

Production values of the film are just about okay. The special effects done on horror scenes are effective. Camerawork by Satish is pretty impressive and looks good on screen in the night effect. Music by Siddharth is apt and editing was also impressive as all the horror scenes have been cut effectively. Coming to the director Rama Krishna, he has done a disappointing job as he has showcased the same old stuff time and again and irritated the audience.

On the whole, Darpanam is the same old horror thriller which has nothing novel to showcase. The same old thrills, haunted house setup, and horror scenes are in abundance in this film making it a terrible watch this weekend. Ignore if safely.