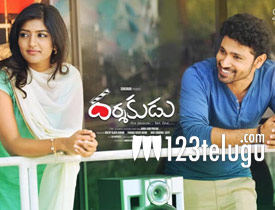 Sukumar, who earlier produced the successful Kumari 21F has come up with yet another flick called Darshakudu which has hit the screens today. Let’s see how it is.

Mahesh(Ashok) is an aspiring film director who always dreams of making a new age love story. Somehow, he gets a chance to direct a film and kick starts its shoot. The actual story begins when he falls for a costume designer called Namratha (Eesha Rebba ). What problems does his love story create to his film? Will he finish the film in time? That forms the rest of the story.

The concept of a film director falling for a costume designer is quite interesting. Debutante Ashok is okay and gives a decent performance in the film. Telugu beauty, Eesha Rebba looks beautiful in the film and acts convincingly in her role. The first half of the film is okay with some passable scenes between the lead pair.

Upcoming comedian Sudarshan Reddy as hero’s friend is okay and his comedy timing brings a few laughs here and there. Pelli Choopulu fame Priyadarshi’s comedy in a small scene is good and evokes a few laughs. The interval block is good and reminds of some Sukumar mark intelligent scene narration.

As the film is all about a love story between the director and a costume designer, most of the scenes run only between the lead pair which may disappoint the regular audience to an extent.

This genre has a lot of scope for comedy but the director has completely neglected it. The second half of the film runs on a flat note without any high moment in it. Though the last 20 minutes of the film has some emotions, it lacks a proper depth and purpose in it.

The director’s idea of making a love story based on a film director and costume designer is good but he should have taken enough time and worked on the script for a better output. Editing is okay as the film’s runtime is short and crispy. The camerawork is below par as the quality and lighting remind you of short films. Music is okay and the theme of Darshakudu is good. Production values for this low budget film are okay.

On the whole, Darshakudu is a predictable love story which has nothing novel to offer. Though the first half of the film is okay with some passable moments, the second half completely runs on a single point which may not appeal to a larger section audience and ends up as a strictly okay watch this weekend.