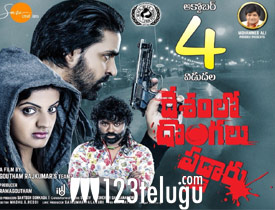 Continuing the trend of low budget films, yet another movie which has hit the screens today is Khayyum’s Desam Lo Dongalu Paddaru. Let’s see how it turns out to be.

Shakti(Khyayyum) and Jijjo(Shaney) are two small-time criminals who kidnap a prostitute called Seetha(Tanishq Rajan). After a point, Jijjo sets eyes on Seetha and tries to molest her. He even decides to kill his best friend Shakti for the girl but things become upside down when the concerned people of Seetha start attacking the two friends. Rest of the story is as to how the close friends solve their problems and fight the deadly goons.

For the first time in his career, Khayyum gets to play a lead and he looks decent as Shakti. His screen presence is good but he needs to improve with his expressions. Shaani, who plays Jijjo is neat as the guy with negative shades. His chemistry with Khayyum is good as certain scenes between the two friends have been executed well.

Sameer and other supporting actors are just about okay. Heroine Tanishq Rajan looks weird during the beginning of the film but she does a decent job as the film reaches the climax. The camera work in the film is impressive as the rustic forest visuals and the drone shots look good. Prithvi who plays the main villain is good and brings a certain depth to the film.

The storyline of the film is quite weak as the first half has absolutely nothing to offer. The villain set up, especially the gay villain irritates you to no extent. Slow motions shots, unnecessary elevation and so much of melodrama bring the film down in no time.

There is no proper flow of scenes as the film moves without any motive in the first half. Certain performances are so over the top that they will leave with a headache right away. The flashback episode of the hero was not needed and frustrates the audience in no time.

One of the biggest drawbacks of the film is the way the proceedings are narrated with no basic intent. Scenes have no link and everything looks abstract and does not make any sense. The twists that are showcased are silly and outdated.

Production values are decent for this low budget film and so was the production design. Looks like the editor was sleeping as the film could have been made crisp in many areas. The slow pace is one of the villains and the director has done nothing about it in his narration. Background score is neat but the songs were bad.

Coming to the director Gautam, he had made a disappointing debut with this film as his narration is jaded. He did not engage the audience in whichever manner and makes the film go on and on without any meaning or destination. Some of his shot-making in a few shots during the forest episodes are good but the rest of it is truly below par.

On the whole, Desam Lo Dongalu Paadru is a meaningless crime drama which has nothing going its way. The film does not engage you in any which way and bores you right from the beginning scene itself. All you need to do is to stay away from this one even if it is aired on TV.