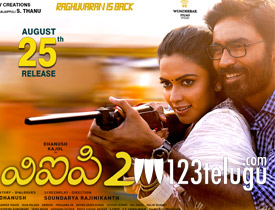 After the huge success of VIP, Dhanush and team are back with its sequel which has been titled VIP 2. The only addition to the cast is the mighty Kajol who plays the negative role in the film. Read on to see whether the sequel lives up to its expectations or not.

The story continues from where it was left in the first part. Raghuvaran(Dhanush) is a successful engineer who works for Anita constructions, a new entry into the corporate world. Their sudden rise is not digested by the MD(Kajol) of Vasundhara Constructions who starts targeting both the company and Raghuvaran personally. Rest of the story is as to how a small-time engineer like Raghuvaran takes on the might Vasundhara in the big bad corporate world.

The film heavily relies on the star power of Kajol and Dhanush. As expected, Dhanush is pretty impressive in the film. His body language, dialogue delivery and the way he matches his screen presence with Kajol look good on screen. Vivek is decent with his comedy as the film moves swiftly till the half point.

Kajol looks gorgeous as the corporate company head and does a good job. All her confrontation scenes with Dhanush have been executed quite well. The comedy scenes between Dhanush and Amala Paul in the first half evoke good laughs.

VIP clicked mainly because of the interesting thrills and amazing background score by Anirudh. That is clearly missing in the sequel. After writing the first half fairly well, Dhanush is short of tricks and ends the story in a silly and stupid manner.

Both Kajol and Dhanush, who don’t see eye to eye bond over a few drinks in a helpless situation and end their animosity in the most logic less manner. This looks over the top completely. Ritu Varma is wasted in a cameo.

Also, there is no conflict point after a while as the war between Kajol and Dhanush is sidetracked and the film takes another route completely. Clearly, the film misses out on the charm, wit, and humor that worked in the first part.

Music by Sean Roldan is a huge disappointment as not even one song is impressive. The same goes for his background score too. Camera work is neat and so were the production values. Kajol has been designed supremely well. Dialogues are very good and have been written quite interestingly.

On the whole, VIP 2 is a silly sequel who does not live up to its expectations. Kajol and Dhanush’s confrontational scenes during the first half are the only saving grace. Abrupt ending, lack of a conflict point and basic drama during the second half makes the film go downslide and leaves you in despair. Check out for some better releases that have hit the screens this weekend.