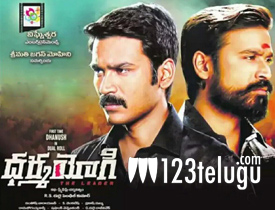 Dhanush’s new film Kodi has been dubbed into Telugu as Dharma Yogi. Also starring Trisha and Anupama Parameswaran as the female lead, this film has hit the screens today. Let’s see how it is.

Dharma(Dhanush) and Yogi(Dhanush) are twin brothers who grow up in a huge political family. While Yogi decides to take a plunge into politics, Dharma studies hard and becomes a college professor.

One fine day, Yogi decides to run for a major seat in his area’s upcoming elections and his girlfriend Rudra(Trisha) joins the opposition party and gets ready to contest against Yogi.

The twist in the tale arises when Yogi suddenly gets murdered. Who killed Yogi ? What is the story behind this conspiracy ? and what will Dharma do to find out who the culprit is ? That forms the rest of the story.

One of the biggest assets of the film is an intriguing story line. The way a political angle has been induced between two brothers with some good amount of twists is very engaging. The one featuring Trisha will impress you big time.

As expected Dhanush does a superb job in both his roles. The way he showcases superb variations in both his characters is just amazing. Trisha is the surprise package of the film and is quite menacing in her stunning role. With this film, she once again proves that she not only can do glamorous roles but can also pull off performance-oriented characters.

The chemistry between Trisha and Dhanush is superb and the way their love track has been showcased is quite new. Anupama Parameswaran is decent in her role. The interval twist is quite engaging.

Background score by Santosh Narayanan is awesome. It just elevates the seriousness in the film to another level. The camerawork by Venkatesh is very good and the serious mood of the film has been carried out wonderfully by the good production values. Editing is decent and so are the dialogues.

Coming to the director Durai Senthil, he does a decent job with the film. The way he has narrated the film with a gripping screenplay and engaging twists showcases his talent. Also, the way he has extracted superb performance from Trisha is sure to watch out for.

On the whole, Dharma Yogi is a taut political thriller with a good amount of twists. Engaging narration and Trisha’s stunning performance are huge assets of this film. If you are looking at something different and do not mind the serious political backdrop, this film will you entertain you decently. You may watch it.