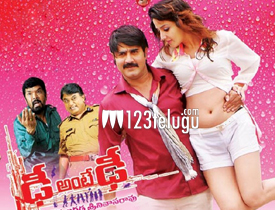 Hero Srikanth is one actor who has films releasing one after the other, despite unencouraging response. He is now back with yet another entertainer titled Dhee Ante Dhee. This film has hit the screens today and let’s see how it is.

Radha Krishna(Srikanth) is a daring police officer who wants to settle down in life. Whenever he finalizes a girl, he lands up in trouble and spoils his marriage. On the other hand, Lakshmi Prasanna(Sonia Mann) is a qualified teacher who runs a highly successful school. Radha Krishna spots Lakshmi during an event and falls in love with her.

One fine day, Radha Krishna’s family fixes an alliance and take him to meet the girl. To his surprise, the girl is none other than Lakshmi Prasanna. During a friendly conversation between the couple, things get serious and they start boasting about their respective professions. The arguments gets so ugly that they challenge each other for a role reversal and prove their talent. Rest of the story is as to how does the couple manage their new jobs and come out victorious.

Srikanth is the major asset of the film. He looks dashing as a strict police officer and gives an honest performance. Heroine Sonia Mann has an equal role to Srikanth and does well with her glamorous hot looks in the songs.

Satyaraj, who plays an important role, is very good in his character and brings a lot of weight to the film. First half has decent comedy by Jayapraksh Reddy. Some comedy episodes featuring Jabardasth Raghu and Posani have been executed well in the second half.

One of the biggest drawbacks of the film is the entire second half. Except for a few comedy episodes, the film has absolutely nothing to offer. The way role reversals have been showcased are below par and do not connect with the audience at all.

The scenes which showcase Sonia Mann as the police officer are pathetic and have been dealt with horribly. There is no clarity in the story during this time and there is a drop in the pace of the movie big time. Even though Posani’s track is decent, it is induced forcibly and has no connection with the story. There are many logics which have gone missing in the film.

Brahmanandam’s track looks out of place and the graphics used for his part are horrible. There is no novelty in the story line and many scenes in the second half do not have any meaning. Songs are misplaced in the narration. The basket ball match showcased in the film irritates the audience big time.

Camera work by Gopinath is pretty good. He makes good use of the locations and shoots the songs wonderfully. Music by the late Chakri is decent and so is the background score. Editing by Gautam Raju is pretty bad in the second half. Screenplay lacks focus as many scenes confuse the audience. Director Jonnalagadda Srinivas manages to write a decent script but falters completely with his execution.

On the whole, Srikanth needs to wait for some more time to get a hit under his belt. Except for his honest performance and an ok first half, there is nothing much going its way for Dhee Ante Dhee. Lack of proper execution and a below par second spoil the mood of the film completely. You can safely ignore the film this weekend and wait for it to come on TV.