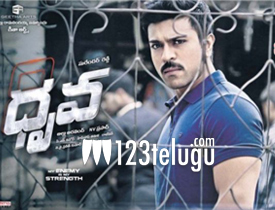 Dhruva is a very crucial film in Ram Charan’s career. He has worked so hard for the film and after a huge round of promotions, the film has finally hit the screens today. Let’s see how it is.

Dhruva(Ram Charan) is a sincere IPS officer who wants to eradicate crime in the city of Hyderabad. Instead of catching the small time thieves, he decides to trace out that one man who is behind all these crimes. He hunts down various big wigs and through them finds out that a man called Siddharth Abhimanyu(Aravind Swamy) is behind all the corporate crimes.

Rest of the story is as to how Dhruva makes some clever plans and nabs the powerful Siddharth down and ends the crime in the city.

Charan’s hard work and dedication are clearly visible in every frame of Dhruva. Right from his ripped body to his screen presence as a cop, Charan has done a fabulous job. Performance wise, he has improved a lot as he is exceptional in all the confrontational scenes.

Aravind Swamy is the surprise package of the film and does a superb job in his negative role. His role elevates the film completely and pushes Ram Charan to give his best. Half of the success of Aravind Swamy’s credit should go to Hema Chandra’s superb dubbing which gives that required edge to his role.

The mind games that are showcased throughout are nicely handled by Surender Reddy and engage the audience completely. Rakul Preet looks gorgeous and does her best in the film. Interval bang and the way certain twists are revealed is pretty good. Navdeep and other supporting cast suit their roles completely.

The film has many logical errors and so many cinematic liberties have been taken. Rakul Preet does not have much to do in the film except for songs. Even though the second half is good, it is a bit lengthy. Many scenes could have been easily chopped off to make the proceedings crisp.

Aravind Swamy’s role has been kept a bit subdued to elevate Ram Charan’s character which looks a bit odd at times. All those who look out for some sheer time pass masala stuff will be disappointed as the film is quite serious.

Dhruva is one of the most stylized films that has come out in the recent times. Credit should completely go to Geetha Arts for spending a bomb in making the film look quite rich. The camera work is top notch and the way Aravind Swamy and Ram Charan are showcased through out is very good.

Music by Hip Hop Thamiza is impressive but his background score is what takes the cake here and elevates crunch scenes to another level. The screenplay is racy during the first half but gets slightly slow in the later part. Editing is decent but a few scenes in the second half could have been deleted to make the film, even more, crispier.

Coming to the director Surender Reddy, he has done a superb job with the remake. The way he has showcased Charan is too good. Suri stays with the concept and does not hamper with the story much. He gives his own touch through his stylish taking and engaging narration.

On the whole, Dhruva is a perfect comeback film for Charan. He should be credited for choosing a unique film like this and giving his best through a standout performance. The engaging narration, interesting twists and some superb mind games are huge assets of this film. The film will impress each and every section of the audience and is bound to do well. If you ignore the small glitches here and there, this film is a perfect action entertainer to watch out this weekend.