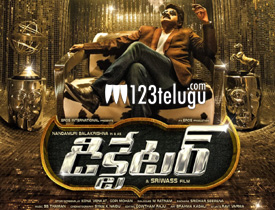 Continuing with the festival releases, yet another most awaited film, Dictator has hit the screens today. Starring Nandamuri Balakrishna in the lead role, let’s now see how this film turns out to be.

Chandu(Balakrishna) lives a normal life with his in laws in Hyderabad. One fine day, he comes across an aspiring actress(Sonal Chauhan) and helps her in a critical situation. The problems gets big and Chandu lands himself in a huge mess.

When all this is going on, Chandu’s family gets to know about a shocking truth about his past which is related to all these problems. What is that shocking truth ? Who is Chandu in real life ? and where does Anjali feature in all this set up ? To know answers to all these questions, you need to watch the film on the big screen.

Undoubtedly, Balakrishna is the heart and soul of the film. He is exceptionally good in both his characters and carries the entire film on his shoulders. The way Srivas has showcased Balayya as Dictator is pretty impressive and elevates the super star to another level. Be it his costumes, dialogue delivery and dances, Balakrishna does a superb job.

Sonal Chauhan is good in her tiny role and provides the necessary eye candy during the first half. Yet another major plus point is that the film has enough fan moments and the much needed punch dialogues. Anjali looks beautiful and shares a superb chemistry with Balakrishna. All her scenes during the second half have come out extremely well.

Interval bang and the flash back episode in Delhi are decent. Some confrontation scenes between Balakrishna and Rati Agnihotri have been executed well and elevate the film to a decent level.

Story of the film is quite old and has nothing much new to offer. The only difference here is that the goons are white collared and the film is set in a Delhi backdrop. First half is just about ok as the proceeding showcase Balayya as a bit subdued which might not go well with the fans.

When you have a star like Balakrishna, his opponent and the villain should be very strong. Sadly, in this case, Bollywood actress Rati Agnihotri does not create much impact. Had the negative roles written in a slightly better way, the effect would have been far better.

Music by S S Thaman is pretty impressive and the background score by Chinna sounds decent. Camera work is impressive as all the locations and songs have been shot exceptionally well. Dialogues are in typical Balayya style and are written keeping his stature and style in mind. Editing is quite decent and so is the art direction. Production values are quite good as the makers have not compromised on the rich visuals.

Coming to the director Srivas, he has done a decent job with the film. Even though he chose a routine story, he kept the proceedings quite simple and added enough elements which would go well with the fans and regular audience. Had he roped in some better actors for the villain’s role and elevated them well, the output would have been stronger.

On the whole, Dictator is a film which has all the necessary ingredients of a typical commercial entertainer. Balakrishna’s thumping performance, mass dialogues, fights and enough glamour elements will keep the fans and B and C center audience happy. If you ignore the routine and predictable story line, this film will be a decent festival outing this weekend. Go watch it.