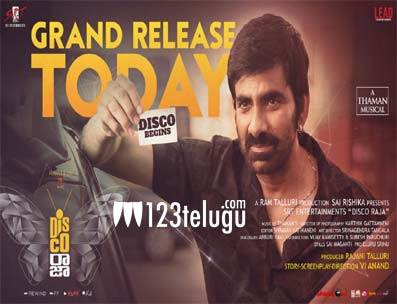 After giving back to back flops, Ravi Teja is back with a scientific thriller titled Disco Raja. Directed by V I Anand, this film has hit the screen today. Let’s see how the film is.

The film starts off by showcasing a research team that bring a dead man (Ravi Raja) alive. He is none other than Disco Raj who has a dreaded past featuring Sethu (Bobby Simha). Upon knowing his flashback, Disco Raja starts hunting for Sethu. The rest of the story is as to how Disco Raja sets things right and where do Payal Rajput and Nabha Natesh feature in this setup?.

Ravi Teja is the biggest highlight of the film as his performance in two different shades is good. He especially nails it in the retro look as his mannerisms, dialogue modulation, and body language are stylish. Tanya Hope as the scientist is pretty good.

Payal Rajput looks beautiful in the retro getup and shares good chemistry with Ravi Teja. Sunil is the surprise package as his performance is pretty impressive in the end. Vennela Kishore gets a lengthy role and he is the one who keeps the proceedings lively most of the time.

The film has amazing camera work as Karthick Gahttamaneni does a brilliant job in showcasing the film in both the past and present time zones. The film starts on an impressive note and creates a good curiosity factor making things look novel.

Last but not the least, Bobby Simha is another highlight as his negative role is good. He has solid screen presence and is an equal match for Ravi Teja. In some scenes he is in fact, better than Ravi Teja. Comedian Satya was okay. The last twist in the climax is decent.

When you choose scientific dramas with a dose of action, the screenplay needs to be razor-sharp but that is not the case in Disco Raja. Director Anand comes to the actual plot only during the interval. His narration is very slow in most areas and this is where the film falters.

Too much time is taken in the flashback as the love story comes as a deviation. The conflict point between the villain and hero is not at all impressive. Though the twist in the climax is good, things could have also been managed without that twist.

The second half goes down as many logics go for a toss. The film just keeps rolling without any motive and creates a dull atmosphere in the proceedings. The emotion between Ravi Teja and his son is missing as things are hurried up.

All those who think there will be glamor featuring Nabha Natesh and Payal, they will be disappointed as the heroines are hardly used in the film. Nabha, in particular, has only two or three scenes and a song.

As said above, the camera work is astonishing. The film reaches another level with Thaman’s solid BGM which is top-notch. The songs are also superb but they have not been placed and shot well. Lyrics are very good and so are the dialogues. Production values are superb as every penny spent is shown on screen lavishly. The set work showcasing the bygone era is amazing. Ravi Teja has been styled well.

Coming to the director Anand, he did not make use of the good concept. He has worked mainly on the hero’s character and starts the film well but from there, things become slow and dull. There are not many thumping episodes and the flashback is also slow-paced. He should have edited a lot of scenes and come directly to the present time zone and make things realistic. His idea of having a twist in the climax will also draw mixed reactions.

On the whole, Disco Raja is a scientific thriller laced with an action backdrop. Ravi Teja is superb in the retro look but the screenplay and narration are very dull and slow. The film is neither bad or has terrific moments and unfolds at its own pace. A section of the audience will connect to the concept but the general audience who look for masala entertainment will be disappointed. So, go in with an open mind to enjoy this film.