Review : Doctor Strange In The Multiverse Of Madness – A decent blend of horror in a visual spectacle
Published on May 7, 2022 3:01 am IST 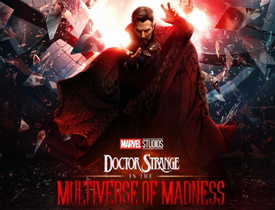 After 6 years, Doctor Strange in the Multiverse of Madness, the second instalment in the MCU’s Doctor Strange franchise, finally hits the screens today. Check out how the film is.

Stephen Strange, well known as Doctor Strange(Benedict Cumberbatch) rescues America Chavez (Xochitl Gomez), a young girl with the ability to travel between different universes, from demons. To keep her safe in his universe, Strange seeks the help of Wanda (Elizabeth Olsen), also known as the Scarlet Witch. Eventually, he realizes that Wanda sent the demons to get America Chavez. Why does she need the teenager? How does Doctor Strange stop the Scarlet Witch? How does the story connect to innumerable universes? All these questions will be answered in the main film.

Like every other Marvel superhero movie, Doctor Strange in the Multiverse of Madness also has a simple story which is just like a fairy tale. What makes the movie a great tale is its crisp narration and astonishing visuals. Cumberbatch looks subtle and performs with so much ease. His alternatives in the rest of the universes are quite different and surprising.

Elizabeth Olsen as Scarlet Witch is simply outstanding and what makes her character a marvellous one is her various emotions in different scenes. She nails her role. America Chavez also gives her best in her debut Marvel film. To our surprise, the film introduces some old and completely new characters, which will return in future MCU films for sure.

The plot is not amazing and one can easily understand it in the first few minutes of the movie. Besides, Marvel fails to reach the expectations of the audiences, who expect the return of the dead (?), at least in the multiverse.

The film has a vast scope to show whatever they want because the concept is all about the multiverse. Nothing is impossible in the multiverse and it’s just a spell away, especially in this franchise. So, the audience expected a lot and that made them a bit disappointed. The runtime is so crisp and it should have been more lengthy to witness more spectacular visuals.

Sam Raimi, well known for the Evil Dead franchise and Spider-Man trilogy, is back with his favourite genre, horror. He perfectly blends both horror and the superhero thing in this film. The visuals are topnotch and the VFX is really mind-blowing in a few scenes. Danny Elfman, Bob Murawski and Tia Nolan give their best for the film. Some visuals of John Mathieson are beyond our vision. His work makes the movie a visual extravaganza.

On the whole, Doctor Strange in the Multiverse of Madness (Doctor Strange 2) is a visual trip to crazy and horrifying universes. One who is aware of the origins of the characters through the many previous films and series’ can enjoy it far better than any other. Watch it if you are a fan of superhero films. (PS: Stick to the seats until you the end titles roll up completely)