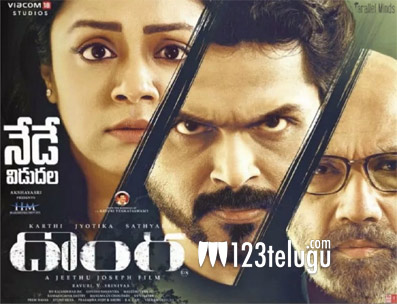 After scoring the blockbuster success of Khaidi, hero Karthi is back with yet another film titled, Donga. Directed by Drishyam fame Jeethu Joseph, the film has hit the screens today. Let’s see how it is.

To loot big bucks from a noted politician Gyanmurthy (Satyaraj), Vikky (Karthi) a thief, from Goa comes to Satyaraj’s home in his disguise as his son. After gaining trust among Gyanmurthy’s family members, Vikky plans to escape with huge money but in the meantime, he faced trouble through Satyaraj’s daughter Parvathy (Jyothika). Who is this Vikky? Why did he come to Gyanmurthy’s house as his son? Will he be able to gain the trust of the family members and loot the money? To know this, you have to watch the film in the theaters near you.

Karthi is on a roll these days. Fresh after the success of Khaidi, he delivered yet another good film in the form of Donga. His makeover as a thief and the attitude showcased is superb. The first half of the film has a passable situational comedy which brings instant laughs. Karthi is too good with his Telugu dubbing and it is in perfect sync throughout the film.

The film backdrop and the interesting twists among the family members will keep hooked throughout. The suspense factor is well maintained until the pre-climax of the film. Actress Sita and the other artists are good in their roles.

Jyothika is brilliant in her role and did her job perfectly. Satyaraj is the showman of the movie as his character has superb variations that keep on changing for every twist in the film. He did a superb job in the film.

It’s not that the second half of the film is bad but the film’s tempo drops at key intervals. Karthi’s look in the thief’s role is a bit wired and could have been presented in a better way.

The film may not have a repeat value as once the suspense is revealed during the pre-climax, the audience finds nothing exciting to watch it for next time.

Director Jeethu Joseph came up with simple family premises and storyline but he succeeded in writing a water-tight screenplay with enough twists and turns. His detailing and character establishment are also too good. Production values for this limited budget film are okay.

Editing by VS Vinayak is fine as the film has hardly unwanted scenes. Cinematography by R. D. Rajasekhar is top-notch as he captured the natural Ooty locations nicely. Telugu dubbing dialogues are good and apt to the film’s genre.

On the whole, Donga is an interesting family thriller that keeps the audience engaged most of the time. The tempo drops in the second half but Karthi’s combination scenes with Jothika have nice emotions. Adding to it, good twists and turns have been narrated well during the end. The icing on the cake is Satyaraj’s role which will surprise the audience and makes this film a decent watch this weekend.