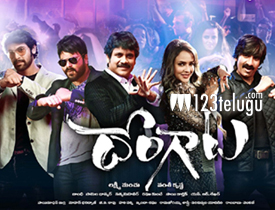 ​Talented actress Lakshmi Manchu​,​ has been doing some meaningful films . She is ​now back with a popcorn entertainer titled Dongaata. Starring Adivi Sesh in the lead role, this film has hit the screens today. Let’s see how the film turns out to be.​​

The story is based on the life of three goons played by Adivi Sesh, Madhu and Prabhakar. One fine day, they decide to kidnap a star actress named Shruthi (Manchu Lakshmi) and become rich in life.

They manage to kidnap her successfully and demand 10 crores from her mom. Twist in the tale arises when the kidnapping goes horribly wrong. ​Rest of the story showcases as to what actually went wrong ​in the kidnapping, and what is the real story behind this ​chaos.
​​
Plus Points :-

Adavi Sesh is definitely a talent to watch out for. He has the looks and does extremely well in his role. Madhu provides the necessary laughs in his comedy role. The second half moves on a emotional note and has some superb twists.

Brahmanandam is very good as Brahmi the man on fire. All his scenes with Pragathi are hilarious ​ and have been executed well​.​ Interval bang is exciting and ​gives the necessary twist to the film. The last twenty minutes of the film are entertaining and filled with good twists.
​​
Minus Points :-

After the initial ten minutes during the start, the movies goes downhill . A number of unnecessary scenes take center stage and deviate the flow of the film​ during the first half.​

The way kidnapping ​episode is showcased and the way the story ​moves ahead is below par. Some illogical comedy scenes ​during the kidnapping episodes could have been easily edited during the first half. The entire episode featuring Giri Babu and the song which comes during this time could have been chopped off.​

Music ​is pretty good as ​all the songs ha​ve been shot well. Dialogues written are apt and gel with the mood of the film. Screenplay of the film is a huge drawback during the first half. The way story moves ahead during this part lacks clarity.

Coming to director Vamsi Krishna, he has done a ​decent job with his execution. He justifies the second half with interesting twists but falters ​slightly during the first part.​ Camera work is good and showcases the superb production values well. ​​​

​On the whole, Dongaata has some engaging twists laced with decent entertainment. Manchu Lakshmi’s performance, Brahmanandam’s comedy and suspense filled second half are huge assets. If you manage to sit through some unwanted and dragged out scenes during the first half, you will end up liking this thrilling crime comedy.