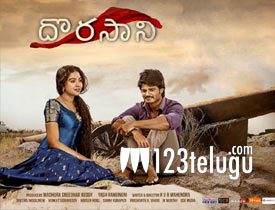 Anand Deverakonda and Shivathmika Rajasekhar’s period drama, Dorasaani, has hit the screens all over today. Let’s check what worked and what didn’t for the movie.

Set in the Telangana backdrop, Dorasaani deals with the story of a rich girl and an underdog. Raju (Anand Deverakonda) falls for his village princess Devaki (Shivathmika) and tries to woo her with his poems. Impressed with Raju, Dorassani instantly connects with him and eventually they both fall in deep love. Rest of the story is as to how the couple survive the caste dominated society? What kind of challenges they face in their journey? To know this, you have to watch the film in the theaters near you.

The entire film is narrated in an authentic manner and showcases the lifestyle of the people in Telangana during the early 80’s perfectly.

Hero Anand Deverakonda has tried to pull off the role of an underdog in his best way possible and succeeded to an extent. His dialogue delivery is good and he performed in a decent manner for a new comer in all the emotional scenes.

Heroine Shivathmika is the show-stealer. Not only does she look pretty in Dorasaani’s role but also impresses with her screen presence and acting in the second half. Her performance in one particular police station scene during the pre-climax sequence is superb and brings a lot of depth to the proceedings.

Fidaa fame Sharanya is good in her maid’s role and so were the guys who portrayed hero’s friend’s. All the supporting characters in the film did a decent job.

One of the biggest minuses for the film is that it lacks noted actors in it. Though the person named Varma who portrayed the heroine’s father suited in his role but as he is new, the audience may not feel the depth in his character. Adding to it, the slow-paced narration and ages-old storyline are also negative points for the film.

Noted actor Kishore, who is prominently known as Kannada Kishore, his character has not been established in a proper manner. Whenever the film needs a serious scene, his character comes in as a Naxalite and utters a few revolutionary dialogues. But other than that, his subplot is nowhere connected to the main plotline.

As the film has an intense narration, it hardly has regular commercial stuff like comedy and duets in it.

Director K.V.R. Mahendra’s story has nothing new in it as we have been seeing the rich-poor love stories in many films. But his groundwork of bringing the authentic flavor in the film is clearly visible on the screen. Coming to execution part, Mahendra tried to narrate the proceedings with proper details but forgot about the film’s pace which runs on a slow note. If he could have crisped the narration, the result would have been even better.

Editing work by Naveen Nooli is decent but he could have chopped off close to ten minutes of the film to make things appealing. Cinematography by Sunny Kurapati is brilliant as he brought life to each frame with his color texture.

Music by Prashanth R Vihari is top-notch and is the major backbone for the film. Though the film lacks commercial duets, he managed to give nice situational Telangana folk songs. His background score is adorable and haunting. Production values for this limited budget film are good.

On the whole, Dorasaani is a love story which exposes the caste-based system in the society and how it is affecting the youth. Anand and Shivathmika’s chemistry is superb and realistic scenes are good. But on the flipside, a slow-paced narration and lack of freshness in the plotline makes it a below-average fare for this weekend.