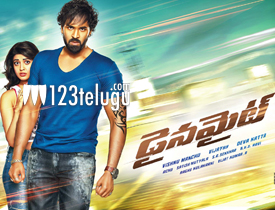 Young actor Vishnu, is attempting some interesting films from the past few years. He is now back with yet another action thriller Dynamite. Also starring JD Chakravarthy, this film is directed by Deva Katta and has hit the screens today. Let’s see how it is.

Sivaji Krishna(Manchu Vishnu) is a daring young man who meets a modern girl named Anamika(Pranitha). Charmed by his attitude, Anamika invites Sivaji to her apartment. As soon as the couple starts getting cozy, a serious twist in the tale occurs and Anamika is suddenly kidnapped by some unidentified goons.

A helpless Sivaji starts chasing them and approaches the cops for help. To his surprise, even the cops are part of a huge conspiracy surrounding the kidnapping. Who are these goons ? Why did they kidnap Anamika ? and how does Sivaji risks his life and saves Anamika forms the rest of the story.

Undoubtedly, Vishnu is the sole attraction of this action thriller. Right from the word go, it is Vishnu and his daring screen presence which makes things work. Vishnu’s angry young man avatar and the way he performs his dare devil stunts is the major highlight of the film. Pranitha looks cute and supports Vishnu throughout the film well.

The stunts choreographed and the realistic chase sequences are the heart and soul of the film. JD Chakravarthy impresses big time as the villain and is particularly good during the climax. Roles like these are tailor made for him and he should attempt them more often. First half of the film is quite racy and holds the viewers on the edge of their seats.

The various twists and turns showcased work well for the film. Confrontation scenes between JD and Vishnu during the climax have been executed well. Viva Harsh is good in a cameo. Nagineedu and Raja Ravindra perform their roles well.

First ten minutes of the second half deviate the film a bit. Songs cause a slight disturbance to the flow of the film and could have been edited out.

Length of the film is a tad long during the second half as the proceedings take their own time to wrap up. All those who are looking for some sheer comedy and masala entertainment will be disappointed a bit.

Screenplay of the film is quite racy except for the initial ten minutes during the first half. Dialogues are perfect and suit the mood of the film well. Special mention should go to stunt master Vijayan for composing some high octane action sequences. Background score of the film is pretty decent.

Editing is ok but certain scenes during the second half could have been chopped off. Coming to the director Deva Katta, he has done a decent job and sticks to the plot. He narrates the film in a good pace and keeps the audience engrossed most of the time.

On the whole, Dynamite is gritty action thriller which showcases Vishnu in a new light. Gripping screenplay, racy first half and some high octane fight sequences are bound to impress the audience. This is not a film where you can expect popcorn entertainment. But who cares, Dynamite moves on a single point agenda and entertains you with some edge of the seat thrills. Go for it.