Review : E Ee – Only for second half 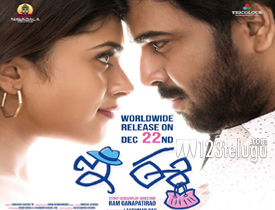 Continuing the trend of low budget films, a new film titled E Ee has hit the screens today. Let’s see how it is.

Siddhu(Neeraj Shyam) is a young man who hates women completely. One fine day, a lady named Hasini(Nyra Shah) joins his office as his MD. Siddhu’s problems get even worse with time. One fine day, when Siddhu goes on a tour with his office mates, he gets into an argument with Hasini. An upset Siddhu starts swearing women which is overheard by a Swamiji who in turns curses Siddhu that he will soon fall in love with Hasini. What will happen now? Will Siddhu who does not like women fall in love with Hasini? To know the answers, you need to watch the film on big screen.

The second half of the film has some good moments. The way things become upside down for the main leads and how they change their genders, all these issues have been showcased in a very funny manner.

Heroine Nyra Shah does a pretty good job in her role. The way she showcased emotions in the second half is quite appreciable. Coming to hero Neeraj, he is just about okay in his role. The scenes showcased on the hero’s family and friends have turned quite well.

One of the biggest drawbacks of the film is the first half. Until the interval bang, the proceedings are quite routine and boring. All the scenes showcasing the hero’s office irritate you to no extent.

The way the Swamiji curses the hero and all the scenes relating to that episode has not been showcased convincingly. There is absolutely no chemistry between the lead pair and it disturbs the flow of the film. The climax of the film looks quite forced and artificial.

Camerawork by Amar is just about average. Editing is pathetic as a chunk of the first half could have been edited out. Production values are pretty decent. Coming to the director Ram, he has done a half-hearted job with the film. He narrates the film on a very boring note and only tightens the grip during the latter part of the film. Had he maintained the tempo well from the beginning, things would have been quite exciting.

On the whole, E Ee has an interesting premise which is spoilt by some lackluster direction during the first half. Things get interesting only during the second half and make for a passable watch. If you manage to sit through the horrible first half, this film has some moments which will keep you hooked.