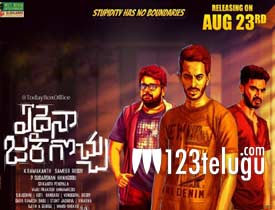 In a mad greed to earn easy money, Jai (Vijay Raja) and his two childhood friends mess up with a local goon Kaali (Bobby Simha). In self-defence, the three friends decide to disturb Kaali by targetting his personal life. Who is Kaali? What is his actual identity and backstory? How will the three teenagers escape from a deadly goon like Kaali? To know this, you have to watch the film in theaters.

Obviously, the showman in the movie is Bobby Simha. He played a crucial role and shines with his performance yet again. His rugged look and the way he carried his character breathe life into the scenes in the second half. The lady named Sashi Singh, who acted as Bobby Simha’s pair, has got a meaty role and she did total justice.

Hero Vijay Raja is just a character in the film and doesn’t have any special introduction song or fight which is indeed a nice way of introducing an actor. He tried to give a decent performance in his joyful teenager role. The two actors who played Vijay’s friends are equally good in their roles and provided passable fun in the first half.

Heroine Pooja Solanki is okay in her purposeful role and delivers a decent performance during the climax. Actor Ajay Ghosh makes his presence in a short and sweet role, which is crucial in the climax portions. Last but not least, star comedian Vennala Kishore evokes healthy laughs in a special appearance.

After a passable first half and an intriguing scene at the interval point, the audiences expect a gripping horror-comedy in the second half. But the pace of the film drops during the narration of various subplots.

Though the flashback episode of Kaali is good, it’s a bit lengthy and makes us wait for it to end. The item song which comes during the pre-climax is unnecessary and interrupts the film’s flow.

The climax portion looks a bit rushed up with a few unwanted VFX shots which could have been avoided.

Director Ramakanth picked a crime theme and narrated it with a mix of comedy. He succeeded in establishing the crime setup decently, but the pace drops at parts in the second half while unveiling various subplots. Had he written a tight screenplay in the second half, the output could have been even better. A few good dialogues written by him are catchy and nice.

Editing is decent, but the film can be chopped off by ten minutes to make things more gripping. Cinematography is good and apt to the genre.

Music by Srikanth Pendyala is good. His background is appealing during crucial scenes. But none of his songs will impress the audience.

Production values for this limited budget film are okay.

On the whole, Edaina Jaragochu is a horror crime-comedy which impresses in parts. Passable first half and good performances from Bobby Simha and Sashi Singh will keep the proceedings engaging. But on the flip side, the slow-paced lengthy second half makes it a below-average fare at the box office.