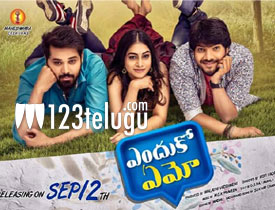 Continuing the trend of low budget films, yet another movie which has hit the screens today is Enduko Emo. Let’s see how the film turns out to be.

Karthick(Nandu) is a software engineer who falls in love with Harika(Punarnavi). Even though Harika hates Karthick at first, she falls in love with him during the course of time. When the couple decides to marry each other, Prince(Noel Sean) enters the scene and challenges to Karthick that he will break his love affair and marry Harika at any cost. Who is this Prince? What does he have to do with Karthick? and whom does Harika finally marry? That forms the rest of the story.

Nandu leads from the front and is decent in the role of Karthick. He gave a settled performance and had a good screen presence. Punarnavi was apt as Harika and showcased good performance during the emotional scenes. But it is Noel who did a wonderful job in a negative role. His dialogue delivery and the way he portrayed the playboy’s role was very good.

Comedian Suigali Sudheer gets a good character after a long time and evoked decent laughs in his role. The twist that comes in the second half has been handled quite well. Posani’s role brings an added edge to the film. The second half has some decent moments during the end which save the film from sinking.

The first half is quite lethargic as the film takes its own sweet time to enter the main story. The romantic track between Nandu and Punarnavi is weak and the couple does not share a good chemistry. The way they fall in love has been showcased in an over the top manner.

Except for the twist in the pre-climax, rest of the proceedings are quite predictable and have been showcased in many films previously. This is where the narration lacks the basic punch and things fall weak for the audience. Apart from Sudigali Sudheer’s track, rest of the comedians irritate you with their over the top comedy.

Camera work is neat and so were the production values. Music by Praveen is strictly average as none of the songs draw your interest. But his background score for this revenge drama was good. Editing in the first half was horrible but things are kept crisp in the second part. Coming to the director Koti, he has done a half-hearted job with the film. He takes forever to enter the story and makes things boring during the first half. But he handles things well during the last fifteen minutes of the second half and saves the film to an extent.

On the whole, Enduko Emo is an outdated revenge drama which has a few decent moments in the second half. But the boring first half, over the top comedy, and predictable proceedings take the film down. Except for Noel Sean’s good performance as the main villain, this film does not showcase anything new and can be watched only if you have absolutely nothing else to do.