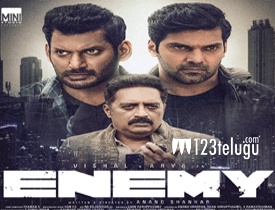 Enemy is a film that has been promoted a lot in the last few days. Starring Arya and Vishal in lead roles, the film is out, and let’s see how it is.

Surya(Vishal) and Rajiv(Arya) are childhood friends. Rajiv is always jealous of Suriya’s sharpness and takes the route of crime at a very young age. Cut to 25 years later, they meet in Singapore. Once again, the war erupts between them in a bigger and crazier backdrop. Who turns whose enemy and what happens, in the end, is the basic story of the film.

Vishal is fit as a fiddle and does well in his action-packed role. He looks solid and goes all out on Arya in the action sequences. Arya is also no less and brings an edge to the film with his negative role. In a way, Arya showcases a new angle in his acting.

Enemy is filled with full-on action. The thrills are new and create an interest for the audience most of the time. The first half is filled with crime-based scenes and the second half is reserved for solid action.

The action shots between Arya and Vishal have been executed so well and create solid thrill for the audience. Prakash Raj, Mamta Mohan Das do their supporting roles well. The BGM is one of the biggest highlights and Thaman delivers elevates things to the next level.

The makers have concentrated more on the styling rather than the emotional part. The story had good scope to elevate the rift between the two heroes but that is not done that well. Also, as it is an out-and-out action film, a few logics go for a toss.

The second half has a few lags here and there. The makers should have edited out the repeated scenes to make things crisp. As the concentration is mostly on the action, the director Anand Shankar lets go of the key scenes which create a build-up to this big rift between the two heroes.

Thaman’s music is dull but his BGM is on fire. The camera work is amazing and so was the splendid production design. The film looks slick and stylish. Special mention to the action choreography which is superb.

Coming to the director Anand Shankar, he has done a decent job with the film. He made solid use of stars like Arya and Vishal and narrated an action-packed film. If he would have handled the emotions a bit better, the output would have been even better.

On the whole, Enemy is an action drama with passable thrills and stunts. Vishal and Arya do well and hold the film together for the most part. All those who love action-packed films with big heroes can surely give this film a shot this Diwali.