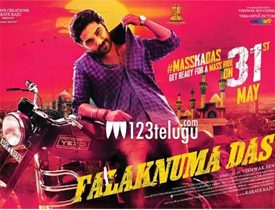 Falaknuma Das is a film which has made a decent buzz with its trailers. The rustic drama has hit the screens today and let’s see how the film turns out to be.

Das(Viswak Sen) is a happy go lucky youth in the area of Falaknuma, Hyderabad. He and his gang get into trouble all the time with silly fights. One fine day, they decide to settle down and start a meat-selling business. But because of Das and his hot-blooded nature, the gang gets into deep trouble and as a result, Das is booked in a police case. Rest of the story is as to how Das being a low-class guy comes out of his troubles and settles down in life.

Viswak Sen is very good in the film. His body language, dialogue delivery and the mass aura that he showcased are top notch. His carefree attitude and the manner in which he showcases his emotions in key scenes will connect with the masses well.

After a long time, senior actor, Uttej gets a meaty role in Falaknuma Das. He is funny, naive and very impressive in the role of Pandu. The film gets a major push because of his supporting role. Rest of the new star cast who did major roles were very impressive. The two guys who played the main villains were good.

The surprise package was director Tharun Bhaskar who played the role of a cop. He was quite good and has a good screen presence. The interval bang is the biggest highlight and has been narrated on a superb note by the director Viswak Sen. The thrills, fist fights, and action choreography that come during this time, everything looks top notch.

This film is for sheer single screens and the youth. There is nothing to look forward to for the families as it has a lot of abuse and violence in many scenes. The climax is shot well technically but a more convincing ending could have made matters even better.

After a gripping first half, the tempo in the film slows down a lot. The proceedings become routine and dull during this time. Not that the scenes are bad but the kick in the narration is missing during this time. The love track in both the halves is bad and upon that, actresses chosen, do not create any impact.

One of the biggest assets of the film is the manner in which it is adapted in Telugu. It has been set beautifully in the old city and every scene looks realistic and raw. Camerawork needs a special mention as the rustic locales of Hyderabad have been showcased in an amazing manner.

Music is good and even better was the background score by Vivek Sagar. Dialogues were full of fun and will connect with the masses completely. Every character has been styled naturally. The production design was superb and so was the editing. Two songs should have been avoided.

Coming to the director Viswak Sen, he makes a decent debut as a director. Viswak’s shot-making has style and a realistic feel. He has put his heart and soul in the film and showcased all his real-life experiences quite well. But, if he had made the second half even crispier the effect would have been even better.

On the whole, Falaknuma Das is an intense and realistic crime drama which has a decent first half. The setup, earthy characters, and performances are big assets. But the second half is a let down as the film is clearly made for the masses and will only appeal to them. All those who look for something different and classy, this film is too hard to digest as it is filled with violence and routine proceedings. So, the choice is yours.