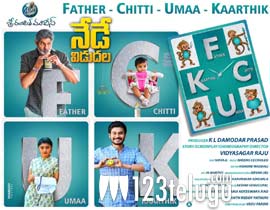 Father Chitti Umaa Karthik (FCUK) has created a decent pre-release buzz thanks to its bold and striking title. The film released today on the occasion of one of its lead actors Jagapathi Babu’s birthday. Let’s see how the film is.

Fhani is also a big-time Casanova. How his Casanova image and the entry of the little girl Chitti adversely impact his son Karthik’s love story with Umaa form the main crux of the movie.

Lead actors’ performances are the main highlight of FCUK. Especially, young actors Ram Karthik and Ammu Abhirami have performed quite well in the given roles. Jagapathi Babu essays a colourful and bold role.

The main theme of the film’s story is rare in Telugu Cinema, and debutant director Vidyasagar Raju and producer KL Damodar Prasad must be appreciated for coming up with such a bold and thought-provoking concept. The making and production values are decent.

The film discusses bold themes like beauty, virginity, condoms, sex among youths and elders in an orthodox society.

Unfortunately, despite having a rare and unique storyline on paper, director Vidyasagar Raju fails to execute it with an engaging screenplay to hold audiences’ attention. Even though Jagapathi Babu’s role has a lot of importance in the story, he appears to be under-utilised.

The main conflict actually begins only during the interval and still doesn’t take off until the last 15, 20 minutes of the story. The comedy track featuring Bharath isn’t rib-tickling. Even though the director infuses the above-mentioned bold themes, they don’t make much impact due to the way they were conveyed on the screen.

FCUK has a wafer-thin story. The film tries to address certain bold issues, but unfortunately, in a boring way. The lethargic screenplay doesn’t move the story forward and tests audiences’ patience. Some of the dialogues are cliched and sexist.

Even though the songs composed by Bheems are situational, none of them will be remembered once the film ends. Shiva’s Cinematography is decent and adequate. Kishore Maddali’s editing scissors should have been sharper, as the film appears quite lengthy without many entertaining and engaging scenes.

On the whole, FCUK is a bold movie narrated in a boring manner. The film, even though has a few strong themes on paper, fails to engage the audiences on the screen and ends up as an utterly disappointing watch. If you are watching the movie this weekend, we suggest you to keep your expectations low.
123telugu.com Rating : 2.5/5