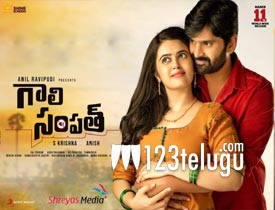 Senior hero Rajendra Prasad and talented hero Sree Vishnu’s comedy drama ‘Gaali Sampath’ has been creating a lot of buzz for the last few weeks. With star director Anil Ravipudi turning presenter with the film, apart from penning the dialogues and screenplay and even acting as a direction supervisor, Gaali Sampath has gained prominence amongst the Maha Shivaratri releases. Let’s see how the film fares.

Gaali Sampath (Rajendra Prasad) lives with his son Soori (Sree Vishnu) in a picturesque village in Araku. He gets the prefix ‘Gaali’ since he is mute and can only produce air while speaking due to an accident that changed his life forever.

Gaali Sampath is passionate about acting. In a dramatic turn of events, Gaali Sampath’s passion disrupts his son’s dream to own a truck and also spoils his love life. This leads to the separation of the father-son duo after Gaali Sampath faces the biggest challenge of his life. You need to watch the film on the big screen to know how they reunite with each other in the end.

Gaali Sampath is Rajendra Prasad’s one-man show. The seasoned actor particularly displays his experience in the mime scene. Hero Sree Vishnu does well in the role of a son whose dreams are broken due to his father. He was pretty good in showcasing his helplessness and his emotional bonding with his father in several crucial scenes.

Comedian Satya as the ‘voice of Gaali Sampath’ generates quite a few laughs with his funny translations of Gaali Sampath’s ‘dialogues’. Newbie Lovely Singh looks pretty, but her role is very limited. Rest of the film’s supporting actors do their job well.

The climax scene where Gaali Sampath overcomes his biggest fear and challenge with the help of rain which he hates for wrecking his life is good.

The stale comedy and the 90s style emotions and narration are the major drawbacks of Gaali Sampath. The film was made during the lockdown, especially when audiences watched a lot of international shows and movies. But audiences will have to watch Gaali Sampath with the 90s sensibilities and that’s too much to ask for, since they have evolved now.

The film’s main USP, the funny air sounds Gaali Sampath makes while speaking is silly and fails to draw any laughs and it only gets irritating after the first few scenes. The love track between Sree Vishnu and Lovely Singh fails to make any impact. Even the separate comedy track featuring Srikanth Iyengar and Anish Kuruvilla tests audiences’ patience.

One can’t help but wonder why Anil Ravipudi, who is usually known for designing some rib-tickling comedy episodes in all his previous movies, has come up with such a lackluster screenplay and comedy in Gaali Sampath. Director Anish Krishna manages to extract good performances from all his lead actors. But he couldn’t do much beyond that due to an illogical and outdated script.

Cinematography by Sai Sriram is decent as he captures the beauty of Araku well. Music composer Achu’s background score in the mime scene is quite moving and makes the scene stand apart. The songs he composed are fine but they don’t make a lasting impression. The film is made on a modest budget and it shows on the screen.

Gaali Sampath, despite having big names like Rajendra Prasad, Sree Vishnu, and Anil Ravipudi does not create the needed impact. The story is a bit outdated and the narration gets illogical in places. The film’s fate at the box-office heavily depends on how the B and C center audiences receive the loud comedy generated through Rajendra Prasad’s Gaali Sampath character. If you are planning to watch Gaali Sampath this weekend, we recommend that you just keep your expectations low.