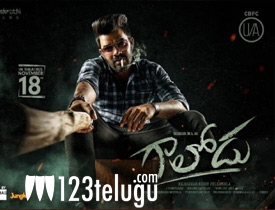 Sudigali Sudheer is a popular name in the TV industry. He has turned hero for a film called Gaalodu which has hit the screens today. Let’s see how the movie turns out to be.

Sudigali Sudheer is known as Gaalodu in his village as he has absolutely no seriousness in life. He gets into a fight with the village Sarpanch’s son and accidentally kills him. He runs away to Hyderabad and in one incident, he helps the heroine played by Gehna Sippy. Impressed by this, she puts him as her driver and also falls in love with him. But like in all movies, the heroine’s father gets upset and tries to stop the affair. How does the couple come out of this is the story of the film.

The film is a regular love story but Sudigali Sudheer stands out. He is superb and has solid screen presence. Everyone will be shocked to see dance in the film. He is as good as a star hero when it comes to dances. The mass fights and attitude suit Sudheer quite well and will be liked by many.

Gehna Sunny plays the female lead and she too was also good in her role. She shares good chemistry with the hero. Saptagiri and Shakalaka Shankar were good in their comedy roles.

One of the biggest assets of the film is the music by Bheems Ciciroleo. All the songs are superb and have also been shot quite well. The climax fight is styled well.

The film has absolutely no story and is weak in the emotional department. The entire first half has no story as the hero introduction and mass shots bore the audience. They look good on Sudheer but are dragged for no reason.

The director decided to showcase Sudheer in a mass manner which sounds good but is taken to the extreme level and it looks over the top. There was absolutely no need of so much hero elevation in so many scenes and this makes the audience bore.

The actual plot is water thin and there are no twists and turns in the movie. The heroine’s father is key and the actor chosen is very dull. The same is the case with the main villain as well.

The heroine falls for an unethical hero and the reason for her to go crazy on him has not been established well. Also, the climax is rushed and the court scenes look outright silly after a while. The film has no seriousness at all in the first half.

As said earlier, music by Bheems is just amazing and so was his BGM. The locales chosen for songs and the choreography was also impressive. The dialogues and camera work were also neat along with the production values.

Coming to the director Rajasekhar, he has done a poor job with the film as his narration is lack lustre. The concentration that he put on music, dance and fights is good but the rest goes for a toss. The film has no emotion and weak supporting cast derail the film.

On the whole, Gaalodu is silly action drama that has nothing new to showcase. Sudigali Sudheer is the only solace as he is superb with his dances and mass role. But sadly, the film fails in the other departments and ends as a boring watch this weekend.