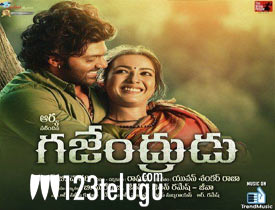 The 2017 released Tamil film, Kadamban is dubbed in Telugu as Gajendrudu. Starring Arya and Catherine Tresa is the lead roles, the film has hit the screens today. Let’s see how it is.

The film opens in a thick forest showcasing a group of tribes leading lives with their families in a happy way. On the other hand, a businessman called Mahendra(Deepraj Rana) eyes the rich natural resources in that area and plans to vacate these tribals from the forest. Gajendrudu (Arya) opposes this proposal and declares war against the big wings. Rest of the story is as to how Gajenrudu and his people face these rich businessmen and save their land?

The tribal people’s lifestyle and their innocence is showcased nicely with a proper forest backdrop. Hero Arya’s beast look with Chiseled body is presented in a convincing manner and he is apt in the look as a tribal guy.

His emotional performance during the crucial junction of the film is good and elevates the scenes. Heroine Catherine is beautiful as a tribal girl and did her part decently in the limited screen space. Arya and Catherine Tresa look great together as a pair.

All the other people who were seen in as tribals are okay in their roles. Climax sequence where Arya’s gang attack the villain’s with forest weapons is good.

The biggest drawback of the film is that it runs on a flat note with slow-paced proceedings. Though the main issue regarding the survival of the tribal community is exposed, it is not addressed in an effective manner.

The chemistry between the lead pair is good but their track is not established in a proper manner. Yet another minus is that the film lacks regular entertainment like comedy and foot-tapping songs. The villain gang showcased in the film are not that effective.

Director N. Ragavan should be appreciated for picking up this kind of theme and making the film with a star like Arya. He tried to address the problems of tribal people and loopholes in the system which affect their community. But his execution lacks an engaging screenplay. Yuvan Shankar Raja’s songs are disappointing but his background score is arresting. Production values for this medium budget film are nice.

Editing work by Dev is good as he tried his best to keep the film’s run time short. Cinematography by S. R. Sathish Kumar is brilliant as he captured some beautiful locations in the forest. VFX and graphics work are decent. Costume design is beautiful as all the artists look apt in their roles.

On the whole, Gajendrudu is the story of tribals who go to extreme levels to fight against corporate giants for their survival. Arya is good in his role but the slow-paced narration and not so effective screenplay spoil the flow of the film making it a below par watch this weekend.