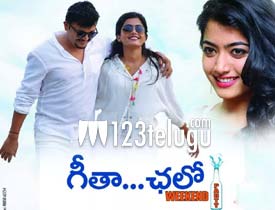 Cashing in on the craze of Rashmika in the Telugu states, her Kannada film Chamak has been dubbed in Telugu with the name Geetha Chalo. The film has hit the screens today and let’s see how it is.

Krisha is a playboy by nature and loves to party full time. Upset with his nature, his parents force him to get married. Seeing this, he makes a plan to marry an innocent girl so that his party culture would continue. In this process, he searches for an innocent girl and meets Khushi(Rashmika).

Impressed by her humble nature, he marries her. But he gets a rude shock when he comes to know that Khushi is no innocent and a crazy party girl like him. What will Krishna do now? Will he leave Khushi? Why did Khushi act as an innocent girl? To know all this you need to watch the film on the big screen.

Rashmika is a major attraction to this film. She portrayed a character with two shades and does extremely well. Her bubbly nature, expressive eyes, and emotional avatar are a big plus to the film.

Kannada star Ganesh was top notch in his role. His comedy timing and chemistry with Rashmika was very good. The first half has a few good moments when compared to the second. The film banks heavily on the performances of the lead pair and they did an amazing performance.

The story of the film is quite routine and does not boast anything new. As the entire film runs on a single thread, there are not many characters or situations which interest the audience much. Also, there is heavy Kananda flavor in the film.

After a decent first half, the second half becomes quite dull and slow. Also, various scenes featuring the lead pair look artificial and forced. Logic is missing in a few situations during this time. The emotions do not work in the second half as everything happens all of a sudden.

Music of the film is just about okay but the background score was very good. Editing is crisp and so was the Telugu dubbing was done for the film. Santosh Raj’s camerawork was impressive. Coming to the director Suni, his idea was good but his execution faltered a bit in the second half. Though his direction was not bad, he did not make the film entertaining and narrates in a slow manner.

On the whole, Geetha Chalo is a youthful romantic drama which is narrated in a very slow manner. Rashmika is the major attraction for this film and will bring in some crowds. But the film has its own share of demerits like lack of proper conflict point and dull second half. All those who like to see a Rashmika film can try this film out but the rest need to lower their expectation as there is nothing new which has been showcased here.