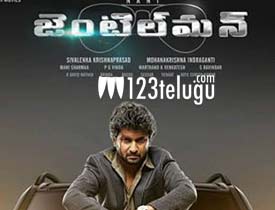 After delivering some entertaining hits like Bhale Bhale Magadivoy and Krishna Gadi Veera Prema Gadha, Nani has changed gears and is back with a thriller titled Gentleman. Directed by Mohana Krishna Indraganti, this film has hit the screens today. Let’s see whether Nani continues his winning streak or not.

The story starts off with two lovely girls Catherine(Nivedha Thomas) and Aishwarya( Surabhi) meeting up on a plane journey. Each of them share secrets about their respective boyfriends and become good friends during the course of time.

Twist in the tale arises when Catherine finds out that the man(Nani) she is dating is exactly a look alike of Aishwarya’s boy friend too. Left with no choice, she heads back home only to find out that her own boyfriend is killed in a deadly car crash.

Catherine starts suspecting things and decides to investigate who actually Aishwarya’s boyfriend is. Who is this man ? What does he have to do with both these girls ? and What is the actual story behind this look alike confusion ? To know answers to all these questions, you need to watch the film on big screen.

Credit should go to Nani for accepting such a different project when he could have continued doing these safe commercial entertainers. Full marks to Nani for allowing Nivedha Thomas take centre stage while he stays back in his character. Nani’s role required a lot of composure to sustain the suspense till the end and not once does Nani goes out of frame. This clearly show his caliber as an actor.

Nivedha Thomas makes a striking Tollywood debut. It is her solid performance that keeps the film going. Right from her looks to acting prowess, she has nailed it and is an actress to watch out for. Interval bang is also good as director Mohana Krishna sets up the film for a racy second half.

Second half of the film is where the real action starts and the proceedings are well maintained till the end. Once again, Vennela Kishore continues to impress with his funny antics. Even though he is there for a bit, all his scenes and expressions light up the proceedings big time. Srinivasa Avasarla is decent in his important role.

One of the major drawbacks of the film is the excessive run time. Thrillers like these should be quite crisp and major scenes in the first half could be edited even now to make things better.

Even though both the love stories look good on screen, the director takes too much time to establish them and this ruins the first half a bit. The pub song which comes during the second half looks out of place.

The way Surabhi’s character is conceived during the climax and the way she gets to know the reality, all these things could have been shown in a better way. The so called commercial aspect is totally missing and this may not go well with regular audience.

Mani Sharma’s music is quite decent but it is his background score which helps the film big time. Dialogues are good but it is the thumping camera work which gives the film a new light. Production values are quite good and so is the art direction. As told earlier, the film needs major editing during the first half.

Coming to the director Mohana Krishna, he has done a pretty good job with the film. The way he has narrated the film by maintaining the suspense thread till the end is pretty good. Gentleman is one of his best works and he has given every actor due importance and extracted good performances from them.

Verdict:-
On the whole, Gentleman is one of Nani’s best performances till date. Time and again, he is upping the ante by doing interesting projects and this film falls in the same league. Icing on the cake is Nivedha Thomas’ brilliant performance and the suspense factor. The film will hold strongly especially in the A centres. Finally, if you manage the a slightly slow first half, Gentleman will entertain you decently with its thrills.