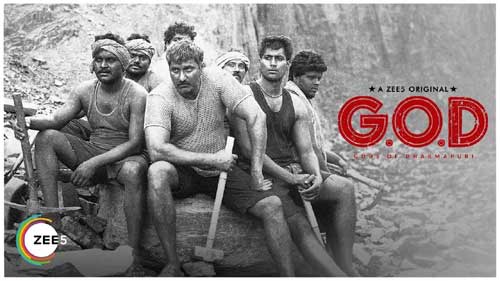 So, continuing the series of reviewing movies and shows during the lockdown period, our today’s pick is the Telugu web series Gods of Dharmapuri. This series is directed by Anish Kuruvilla and has Satyadev, LB Sriram, Chandni Chowdary in lead roles. It was released on 29th October and is now available on Zee 5.

Pratap Reddy, who belongs to Kadapa arrives in Dharmapuri along with his wife and kids to work as mining labor. As time passes by, he braves several life-threatening incidents and becomes the messiah of the masses dethroning feudal lord D N Reddy. But as time passes by, two of his sons who have issues of their own get into various problems creating tension in Dharmapuri. The rest of the story is as to what happens to them in this big bad world of power and jealousy.

Satyadev Kancharana is superb in his complex role and surprises with his acting capability. Chandini Chowdary looks gorgeous as the village belle. LB Sriram is the best of the lot in his negative role. The characters have been established quite well and the conflict point showcased is good. The initial segments establish the characters whereas the last five episodes have solid drama and gripping narration

Overall, Gods of Dharmapuri is a well-made web series with a rustic backdrop and gritty performances. The world of Dharmapuri, performances, and narration are good assets. A bit lengthy and slow to start but ends as a decent watch this lockdown season if you are the one who likes serious dramas.