Review : Godse – Works only in parts 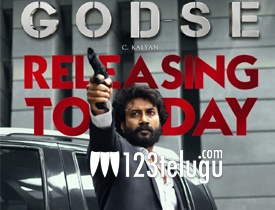 Satyadev’s Godse has created a decent buzz with its trailer. The film has hit the screens today and let’s see how it is.

The cops in Hyderabad are on a high alert as a man named Godse(Satyadev) holds some bigwigs as hostages and raises a few demands. In comes Vaishali(Aishwarya Lakshmi) to solve the case. Who is this Godse? What’s his back story? and how Vaishali handles this case? That forms the story.

Satyadev is a solid actor and proves the same with his sensible act in the film. The manner in which he performs in key scenes is quite good to see. There are mostly close-up shots of Satya and he delivers his lines convincingly with good facial expressions.

Aishwarya Lekshmi makes a decent Telugu debut and has some good scenes to showcase her talent. All her scenes with Satyadev have been established well by the director.

The first half and hostage drama has been showcased in a decent manner in the first half. The speech given by Satyadev in the climax has been written well and raises key questions about the system.

One of the biggest drawbacks of the film is that there is no depth in the emotions. Except for Satyadev’s character you don’t sympathize with any other role in the film. The second half which reveals the key flashback is so boring and routine.

The director has taken way too many cinematic liberties in the film. During the climax, Satyadev just bulldozes himself into a place where the CM is lodged and starts taking over without any opposition. This aspect looks way over the top and is silly.

The second half goes for a toss as the story is routine and has nothing to showcase. The hostage drama during this time has been showcased earlier in many films as well. The film’s look is also outdated and the narration is rushed.

Music by Sandy Addanki is just about okay but his BGM was decent. The production design is bad and so was the camerawork. Dialogues need a special mention as they are thought-provoking. Editing is so-so as many scenes in the second half should have been edited out.

Coming to the director Gopi Ganesh, he has done a below par with the film. He has taken an interesting subject of questioning the system and sets the first half quite well. But once the second half starts, the film goes for a toss and mundane drama takes center stage.

On the whole, Godse is a half-baked hostage drama that has a decent first half. The second half is dull and the emotional aspect does not click and bores the audience with a silly climax. In all this, what keeps you going is Satyadev’s sincere and intense performance.