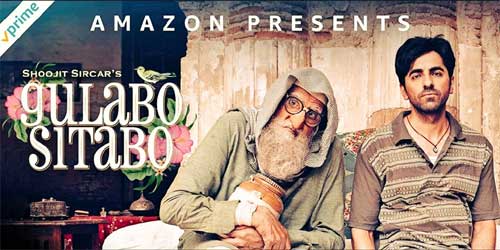 So, continuing the series of reviewing movies and shows during the lockdown period, our today’s pick is the latest Hindi biggie Gulabo Sitabo starring Amitabh Bachchan and Ayushman Khuranna. The film is out on Amazon prime now and let’s see how it is.

The film is based in the backdrop of an ancient villa called Fatima Manzil in the rustic city of Lucknow. Mirza(Amitabh Bachchan) is the landlord of the villa and wants to kick out all the old tenants who have been staying there from ages so that he can enjoy the sole ownership of the villa. But one of the tenants, Bankey(Ayushman Khurana) does not want to leave and creates problems all the time. Left with no choice, Mirza uses the law to kick out his tenants. How much does he be successful in doing it forms the rest of the story?

Director Soojit Sircar gets it right once again with his narration. The backdrop he chooses and the way he sets his key characters of Amitabh and Ayushman in the old city of Lucknow is superb. Gulabo Sitabo totally belongs to Amitabh Bachchan and the legendary actor is a treat to watch on screen. The star actor’s makeup, body language, dialogue delivery is top-notch. Not to forget his walk, the Big B entertains you till the last scene of the film.

Ayushman Khurana gets a lifetime opportunity of acting with the legend and he too does a superb job in his role. All his confrontational scenes with Amitabh are just too good. The subtle humor in the film is pretty good and keeps everyone entertained. The writing is strong as the characters are quite rooted and look real.

The film has only three to four locations but they have been shot extremely well. Dialogues and the Urdu diction used is pretty good. The last half an hour of the film is top-notch and the twist that comes during this time is superb and surprises everyone. BGM and production values are also decent. Vijay Raaz and other key characters are good in the film.

After starting the film on a very interesting note, the middle part of the film becomes a tad slow. Things move at a slow pace and Ayushman’s role does not have much to do during this time. The film has a very unique premise and is not for those who expect some masala fun seeing the star actors.

Overall, Gulabo Sitabo is a well-made film with a unique premise and interesting narration. Though the film becomes a tad slow in the middle, the last half an hour is quite gripping with a solid twist. This film should surely be given a shot for Amitabh Bachchan’s mind-blowing performances as he will entertain you till the end with his adorable act. Go for it.