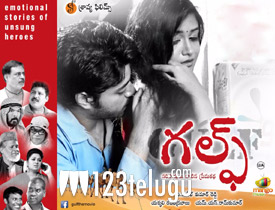 Continuing the trend of low budget films, yet another movie which has hit the screens today is Gulf. Directed by Sunil Kumar Reddy, let’s now see how this film turns out to be.

Siva(Chetan) is a happy go lucky youth who wants to go to the Gulf and earn good money. Even though his parents disapprove of his choice, he somehow reaches Dubai. There, he meets Lakshmi(Dimple Hayati) who is also in Dubai for the same purpose. Siva’s friendship with Lakshmi transforms into love but they fall in all sorts of problems like any other Indian public who works in Gulf countries.

As time passes by, they land in deep trouble and one fine day, decide to head back to India. Did they make it back safe to India? and what problems do they face in the course of time is the whole film about.

On the biggest assets of the film is the backdrop itself. Director Sunil Kumar has nicely showcased how Indian workers face problems in the Gulf and how they are treated by their bosses. Also, the way the interim politics amidst the Indians plays a big role has also been shown well.

The basic emotions that all Indians go through when they meet their families after a long time has been dealt in a very emotional manner. Heroine Dimple Hayati is quite impressive in her role and showcases wonderful emotions.

After a decent first half, the film goes down drastically during the second half. The hero starts agitating against the Arabs and these sections could have been handled well.

Also, the director shows too many problems yet again in the second half rather than concluding them on a quick note. Even though the love track between the lead pair is decent, it is a dragged a bit too much at times.

The climax of the film is a bit disappointing and might not go well with most of the audience. The film suffers from continuity factor and this is clearly visible on the screen.

Praveen Emmadi’s music is decent. Camerawork by S V Sivaram is good and showcases the film in a realistic light. Editing is apt and so were the dialogues. Production values by M S Kumar are pretty good. Coming to the director Sunil Kumar, he has chosen a very interesting subject and also showcased it well during the first half. But the way he loses his grip on the later part and makes the film go wayward is pretty disappointing.

On the whole, Gulf is a very realistic film about the problems that Indians face in the Gulf countries. The backdrop is quite interesting and the director manages to showcase it nicely halfway through. But some dragged out narration and lack of the depth in the proceedings during the second half make the film get a documentary kind of a feel. All those whose close ones work in the Gulf will relate to this film but for the regular audience, it is a below average watch this week.