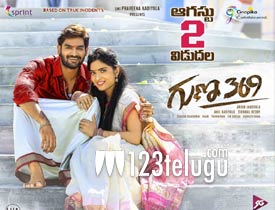 Not affected with the result of his last film, Hippi, young hero Kartikeya has come up with yet another film, titled, Guna 369. Touted as a romantic action entertainer, the film has hit the screens today. Let’s see how the film turns out to be.

Guna(Kartikeya), who leads a happy life with family and girlfriend Geetha(Anagha) gets cornered in a murder case. How will Guna deal with the unexpected incidents which are happening in his life? What kind of sacrifices he had to make to come out of the case? To know this, you have to watch the film in the theaters near you.

As promoted, the film is based on true incidents and has twists which are unveiled at regular intervals. The main plotline which opens fifteen minutes before the intermission is totally unexpected and raises curiosity for the latter half.

Hero Kartikeya is good in his boy-next-door role which transforms eventually into a mass character in the latter half. Like his previous films, Karthikeya showcased his fine toned six-pack abs and performance-wise too, he was quite good especially in the second half of the film also. Heroine Anagha has an attractive screen presence and did her purposeful role decently. A few love scenes between the lead pair during the first half have come out well.

Jabardasth fame Mahesh gets a meaty role and delivered a good performance. Senior actor Naresh and Hema as the hero’s parents are apt in their roles.

The first half of the film offers nothing new and has predictable narration until the pre-interval. After an intriguing interval block, though all the twits are unveiled in a decent manner, the film’s pace drops and lacks energy in the scenes in the second half.

A song which comes post-interval is a complete misplacement and diverts the mood of the audience. There was a lot of scopes to handle the second half in an even better way but the director neglected it and chose to narrate the film in a regular formulaic template.

Director Arjun Jandyala has chosen a content-oriented strong storyline. But his execution part lacks intensity in a few areas. If the narration was a bit more gripping, the output could have been even better. Music by Chaitan Bharadwaj is below par as none of the songs impress the audience. But his background score during the climax portion is good and brings depth to the film. Production values for this limited budget film are impressive.

Editing work by Thammiraju is okay and he kept the runtime in limits. Cinematography by Raam Reddy is good as he tried to bring the rustic and raw texture to the film. A few mass dialogues are written in an effective manner.

On the whole, Guna 369 is a message-oriented mass film which may find takers in single screens. The twists unveiled in the second half are totally unexpected and are executed decently. But on the flip side, lack of gripping narration in the later part make the film just an okay watch for the weekend. Watch it if you have nothing else to do.