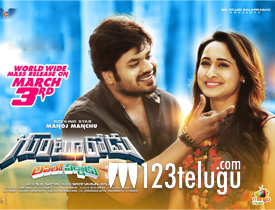 For the first time in his career, Manchu Manoj has come up with an out and out mass entertainer called Gunturodu. Directed by Satya, this film has hit the screens all over today. Let’s see how it turns out to be.

Kanna(Manoj) is a happy go lucky youth in the city of Guntur. One fine day, he gets into a huge fight with a deadly criminal lawyer called Seshu(Sampath) and injures him badly.

Things become complicated when a very upset Seshu starts looking for Kanna and targets his father(Rajendra Prasad). The scene becomes even more chaotic when Kanna falls in love with Seshu’s only sister Amrita(Pragya Jaiswal).

Rest of the story is as to how a normal middle-class guy like Kanna manages to fight the mighty Seshu and ends up marrying his sister.

Manchu Manoj suits the title role completely and impresses in a mass avatar. He is especially rocking in the high octane fights and mouths some powerful dialogues with a lot of ease. Manoj’s energy lifts the film and all his confrontational scenes with Sampath are very good.

Talented actor, Sampath is one of the biggest assets of the film. His character has been written quite interestingly and he does a superb job as Seshu. The small time ego issues shown through Sampath’s character are very good as the film has a very strong villain’s track which is very good in the first half.

Pragya Jaiswal looks decent in her glamorous role. After a long time, Kota gets a good role. Interval bang and the pre-climax fight are a big plus to the film.

One of the biggest minus points of the film is the lack of entertainment. The film does not have much comedy and also the romantic track between the lead pair is quite weak. Climax of the film looks silly as Rao Ramesh’s entry as the minister and the way he solves the issue looks over the top.

The film has a roller coaster effect as whenever the hero-villain track is on, you are entertained but as the film gets into the love track and many other scenes, the proceedings dip severely.

Production values of the film are very good as the rustic locales of Guntur are nicely showcased by some good camerawork. The action choreography needs a special mention as all the fights are superbly executed. Manoj is showcased in a superb way and it also suits his body language. The film needs slight editing during the second half as Prudhvi’s comedy track could have been avoided. Music by DJ Vasanth is decent and the background score is even better. Luckily, the songs do not disturb the flow of the film.

Coming to the director Satya, he has done just an okay job with the film. His way of showcasing the hero-villain conflict is pretty good but he should have padded up the film with some good entertainment and racy scenes. As he showcases too much intensity during the initial stages itself, he runs out of steam as the film progresses.

On the whole, Gunturodu is one film which is clearly aimed at the masses. Manchu Manoj impresses in a new and powerful avatar and Sampath’s performance gives the film some good moments. But some dragged out and below par scenes keep deviating the good plot throughout the film. If you ignore the above such demerits, this film can be watched for the hero-villain conflict and some racy action episodes.