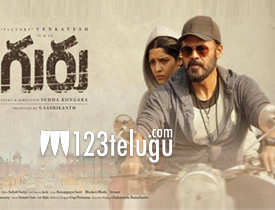 Victory Venkatesh is one actor, who has been breaking barriers by opting some different roles off late. Now, he is back with a gripping sports drama called Guru. The film which is directed by Sudha Kongara has hit the screens all over today. Let’s see how it is.

Aditya(Venkatesh) is an aggressive boxing coach who always has problems with the sports federation. After a serious fight with one of the heads in the association, Aditya is transferred to Vizag to scout young women boxers.

Left with no choice, Aditya heads to Vizag and spots a local slum girl called Ramudu(Ritika Singh). After seeing her careless attitude and raw fighting spirit, he chooses her as his boxing candidate and starts training her.

The twist in the tale arises when the aimless Ramudu starts going against Aditya and his goal. The rest of the story is as to how Aditya molds the local girl and makes her the Indian women’s boxing champion.

Venkatesh gives his career best performance with this film. Guru is definitely Venky’s Chak De of his career as his emotional and balanced performance will just blow you away. Venky gives away unnecessary heroism and lets Ritika Singh take center stage. Venky’s emotions and the way he puts up a fight with his subtle yet intense emotions till the last scene shows what an actor like him can pull off if given a good subject.

Like in the original, Ritika Singh gives a stand out performance. She is the mainstay of the film as her chemistry with Venkatesh is quite striking. Ritika’s body language, her Telugu dubbing, everything is just spot on. The way the sports drama unfolds through some strong and gritty emotions is what makes this film work big time.

The small time politics in boxing, how the sport is neglected and the women empowerment showed are brilliant. Nasser and Zakir Hussain are top notch in their supporting roles. The climax of the film needs a special mention as the way the boxing matches and emotional scenes are clubbed works quite well.

Even though the song Jingidi Jingidi looks good on screen, it could have been easily avoided as it does not gel with Venkatesh’s character. The pace of the film is slightly dull in some areas as the makers willingly make things slow to make everyone understand the emotions.

The film is quite serious and does not have much entertainment. So, all those who seek entertainment from Venky will surely be disappointed.

Guru is technically a very strong film. Credit should go to director Sudha Kongara for sticking to the story and presenting the film in a realistic manner. Production values of the film are top notch as the boxing set up and seriousness in the film have been shown in a stunning way. Dialogues are top notch and the way the film moves ahead with songs in the background is very good. Music by Santosh Narayanan is decent but his background score elevates the film to another level.

Coming to the director Sudha, she has done a brilliant job with the film. Be it her narration or the way she has showcased Venkatesh in a completely new way, everything looks amazing. Sudha’s screenplay is taut as she does not waste much time and finishes the film in a crisp manner. She is surely a talent to watch out for and directors like her will surely carry Telugu films forward.

On the whole, Guru is definitely Venkatesh’s career best performance to date. The star hero leads by example and shows what kind of films an actor in his age should attempt. The intense drama, Ritika Singh’s performance, and racy boxing matches are huge assets. Guru will surely be liked by the overseas audience for its class taking but we need to see how the masses embrace it. If you ignore the slightly slow pace here and there, Guru is one film which will surely impress you and ends up as an entertaining watch this summer.