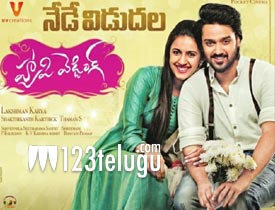 Both Sumanth Ashwin and Niharika are going through a rough phase in their careers and need their new film Happy Wedding to become a good hit. Directed by Lakshman Karya, this film has hit the screens today. Let’s see how it is.

Anand(Sumanth Aswin) and Akshara(Niharika) are a couple who decide to take their relationship to the next level by getting married. But, certain issues leave Akshara confused as she feels that she is doing a wrong thing by getting married in a hurry. This causes a lot of disturbance between the couple and slowly the family members also get involved. Rest of the story is as to how the lead pair solve their issues and understand the importance of marriage.

One of the biggest assets of the film is the basic theme of the film. How the younger generation are taking decisions in hurry and do not have any clarity on life and marriage is pretty good.

Niharika is way better than her first film. She has a complex role to portray and she did a decent job. The way she portrayed all the confused emotions look good in the film. Sumanth Aswin is impressive with his makeover. He too has improved a lot and is now more calmer which helps him and the story of the film in a big way.

The film is filled with good family emotions which are quite contemporary. There is no melodrama or over the top scenes and the run time is also crisp. Murali Sharma, Naresh and Tulasi do their supporting roles well. Indraja gets a good role and she is perfect in it. The pre-climax scene between Murali Sharma and Sumanth Ashwin is handled quite well and has very good emotions.

There is no proper romance and because of this, the lead pair lack chemistry is many areas. Individually, they do well but during crunch scenes the emotions lack the basic weight.

There is also not much comedy which the regular audience look forward to. As the film is based on sensitive emotions, the proceedings take their own time and this makes the film slow in both the halves.

Production values by UV creations are top notch and that is backed up by some awesome camerawork by Bal Reddy who shoots some amazing visuals. Dialogues are meaningful and the styling done for both the actors is very good. Music by Shaktikanth Kartick is below par but Thaman’s background score lifts the film completely.

Coming to the director Lakshman, he has done a decent job with the film. He chose a very contemporary subject which would relate to women more and added emotions and family drama. But his mistake lies in the manner in which he ends the film. After the heroine going through so much of confusion, she changes her mind just like that with one scene in the climax which looks a bit odd. The director should have also added good romance and some heartwarming moments between the lead pair so that the story would have had even good weight.

On the whole, Happy Wedding is a passable family drama which showcases a contemporary theme which is synonymous with the current generation. The emotions work well but the film takes its own time to register as it is based on urban relationships and bonding. Because of this, some might really like it and a few other sections may disown it right away giving the film a limited appeal this weekend.