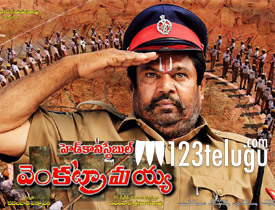 From a long period of time, R Narayana Murthy has been doing films of his own choice. For the first time, he is donning a different role in today’s release Head Constable Venkatramaih. Let’s see how the film turns out to be.

Venkataramaih(Narayanamurthy) is a sincere head constable who does not take any bribe. This attitude of his causes huge problems between him and his wife Padma(Jayasudha). This is also the time when Venkataramaih is posted to work under a corrupt home minister. As expected, things become tough for the minister because of Venkatarmaih’s sincere attitude. Left with no choice, the minister makes a plan and lands Venkataramaih in a fake bribery case.

An upset Venkataramaih then decides to end all the corruption in the city and launches a huge war on the corrupt system. Rest of the story is as to how a simple and honest cop like Venkataramaih manages to win against the mighty politician.

Like in every movie of his, Narayanamurthy gives his best. He is excellent in his role of a sincere cop and performs well. The way he has brought out superb emotions as a helpless cop is one of the biggest plus points of the film. The story of the film is decent and some moments which elevate Venkatarmaih’s sincerity have been handled well.

A lot was said about Jayasudha’s pairing opposite Murthy but the senior actress throws away her star status and nicely compliments Murthy throughout the film. Her role in the second half also gives her a chance to showcase yet another angle in her performance. Some emotional moments showcased between the lead pair have been executed quite well.

After ending the first half on an interesting note, the second half which is quite important goes for a toss. So many silly scenes like Jayasudha joining hands with the corrupt home minister and turning an enemy to her own husband looks over the top and defies logic.

If the above said things are not enough, the love track of Venkataramaih’s daughter and many other silly scenes wayward the film completely. Also, the manner in which Narayana Murthy becomes big in political scenario looks out of the box and does not create any impact at all.

Sudhakar Reddy’s camera work is very good and so are the production values of the film. Vandemataram Srinivas’s music is poor as none of the songs impress one bit. Editing is just about okay and so were the dialogues. Coming to the director Chadalavada Srinivas, he has done a poor job with the film. Even after having a strong story and a talented actor like Murthy, he completely goes off track and adds elements which look outdated and silly making the second half and the film a painful watch.

On the whole, Head Constable Venkataramiah is a film which deals with the sensitive issue of corruption in a contemporary way. Even though the film has a good storyline, the poor execution and some over the top scenes during the second half spoil the proceedings completely. The hard-hitting drama can only be watched by those who like Narayanamurthy and his aggressive acting style.