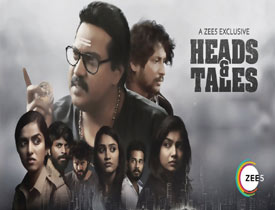 Continuing the trend of reviewing low-budget films, today’s pick is Heads & Tales. It is now streaming on Zee 5. Let’s see how it is.

The film is about three women Alivelu Manga(Divya Sripada) Shruthi(Chandi Rao) and Anisha(Sri Vidya). All of them are going through their own issues in life. Alivelu Manga is having trouble with her jobless husband. Anisha’s fiance does not like her being an actress and finally, Shruthi is having commitment issues in life. How the lives of these three cross paths is the basic story of Heads and Tales.

The basic concept of the film looks good. Divya Sripada is the best of the lot. She as a vulnerable police constable is quite good. Her slang, body language, and dialogue delivery were impressive.

Sri Vidya as a wanna-be star is also neat in her role. Though she goes a bit overboard here and there, she does well. Shruthi is neat in her small role.

The conversation between Sri Vidya and Divya Sripada has been executed well. Sunil shines in his small cameo as GOD. The visuals of the Hyderabad city in the night scenes are pretty good.

There are not many twists as well in the script as the proceedings are also quite simple. Nothing much happens in the proceedings that will move you or get connected with the characters.

Production values of the film are pretty good as the film looks posh and rich. BGM is pretty good and the dialogues were quite impressive. The screenplay is a bit dull though.

Coming to the director Sai Krishna, he has done just an okay job. He has narrated the film just according to the script and did not add much spice. If he would have added more drama the effect would have been more effective.

On the whole, Head and Tales is a simple film that has a good backdrop. Though the performances are good, the dull narration and lack of good drama take down the film and make it just an ordinary watch due to its crisp runtime.