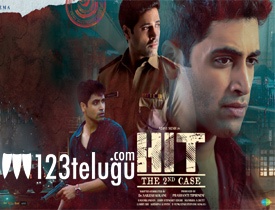 Post Major, Adivi Sesh has become a popular star and is doing some different films. Next in line is HIT 2 which has been released today. Let’s see how it is.

The city of Vizag is stunned with the brutal murder of a young woman. In comes SP Krishna Dev(Adivi Sesh) to solve the case. He investigates the case and even nabs the man behind it. But in a tragic turnaround of events, Dev comes to know that the killer is someone else. Who is this killer? and why is he targeting only women? To know the answers, you need to watch the film on the big screen.

Sailesh Kolanu has directed this second part in the HIT franchise and he has narrated it in a gripping manner. If HIT featuring Vishwak Sen was investigative, this part has more emotions, drama, and good thrills.

Meenakshi Chaudhary looks beautiful in her role and ably supports Sesh. Her subtle emotions and screen presence were quite good. The lead pair’s chemistry is solid. Komalee Prasad gets a good role and surprises us in a serious role. Rao Ramesh was decent as a cop.

The second half of the film is where all the action happens. The thrills, conflict points and the manner in which the killer is revealed is quite good. The film is stylish and director Sailesh narrated in such a way that there is no dull moment in both the halves.

Last but not the least, Adivi Sesh has now become the king of thrillers and cannot put a foot wrong. The way he selects subjects in this genre is superb and HIT 2 gives him ample scope to showcase his heroism and performance. Be it his looks, body language and emotional outburst in the climax, Sesh has killed it.

HIT 2 is a typical serial killer film and has nothing new to showcase. It has simple and engaging investigation but the wow factor which you expect with Sesh films is missing.

The film starts on a slow note and it takes time to enter the main plot. The villain’s track is revealed superbly but the actor who portrayed it could have done an even better job to make the climax exciting. His facial expressions were not up to the mark as the roles had so much scope to enact.

The production values are top notch as the city of Vizag is showcased in a new light. The color tone used by the cameraman is amazing and shows the film in an arresting manner. Dialogues are decent and the production design was amazing. Lyrics were decent but the BGM could have been more gripping. It lacks depth in key places.

Coming to the director Sailesh Kolanu, he has done an impressive job. When compared to the first part, HIT 2 has more meat and style. Though he did not showcase things out of the box, he stuck to the serial killer genre and narrated the film in an engaging note. The lead up to reveal the villain is good but the interaction between the hero and villain should have been more intense. The climax part looks a bit rushed.

On the whole, HIT 2 is a gripping crime drama with good thrills and a solid second half. Adivi Sesh is in full form and carries the film on his shoulders with his superb performance. Though the film starts on a slow note, once the momentum picks up it keeps you hooked and ends as a satisfying watch. Go for it.