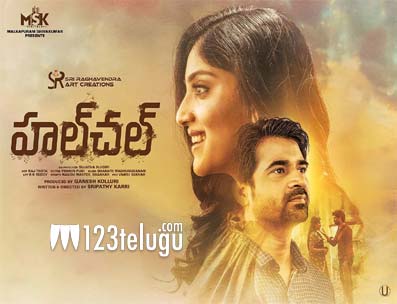 Hulchul is a film that has created a decent effect with its trailers. The film directed by Sripathy Karri has hit the screens today. Let’s see how it is.

Rudraksh (Rudraksh) saves all his hard-earned money in Dubai and returns to India. While his way back, his friend (Krishnudu) gives him a purse and a weird liquid (Hulchul) and asks Rudraksh to give it to Narasimha in Hyderabad. In a tragic turn of events, Rudraksh drinks Hulchul and gets into a hallucination mode. He starts imagining his crush Swati (Dhanya Balakrishna) always in front of him. During this time, the villain gang comes for the drug and purse. What is this Hulchul? What did it do to Rudraksh? What is in the purse ? and how will Rudraksh solve his problems? To know this, you have to watch the film on the big screen.

Rudraksh did a good job in his role which had many variations. He was very good in all the confusing scenes which were showcased when he drinks the weird drug. He has decent potential and did well in this film. Dhanya Balakrishna is slowly turning out to be a good heroine. Not only with her cute looks but she also performed well in the film. Hope she gets more opportunities in the future.

The actor who played the role of the villain was awesome and did a great job in the film. Krishnudu was neat as the hero’s friend. The concept of the film looks interesting. The comedy scenes that come during the second half featuring hero and Krishnudu have been dealt with well. The way the heroine’s role was designed is also good.

When you choose a different concept like this, the screenplay should be racy and scenes need to be thrilling. But that is not the case with this film as the director made the proceedings dull. Though he added a decent comedy, the rest of the scenes were not up to the mark and do not create that effect.

The chemistry between the lead pair and the conflict shown in the story is not good. The various emotions showcased in the film look completely forced. There are many scenes that are way too cinematic and rushed on the audience. The film’s concept had good scope for drama and thrills but the director did not use it properly.

Music by Bharat is pretty good as the songs and music score was impressive. Editing is horrible as close to ten minutes could have been easily chopped off. The camera work of this low budget film was just about okay but the art direction and production design were good. Dialogues were dull and the screenplay by the director is the biggest minus point as it did not have the needed punch. The production values of the film were good but there was no need to spend so much on the film.

On the whole, Hulchul has an interesting storyline that is spoilt by some bad screenplay and dull narration. The thrills needed for such stories is missing in the film completely. Except for a few comedy scenes, this film has nothing exciting and ends as a boring watch this weekend.