Review : Husharu – Only For Youth 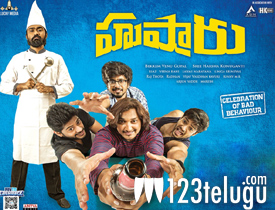 Husharu is one film which has been promoted a lot in the past few days. The youthful drama has finally hit the screens today and let’s see how it is.

The story is quite simple and is based on the lives of four close friends who enjoy life without any goal. After a point of time, a heartbreaking incident happens in one of their friend’s life and this changes everything upside down. What is that incident? How did it change their lives? and how did the rest of the friend’s handle this critical situation? That forms the rest of the story?

The fun factor is decent and has been executed well at regular intervals. Most of it is about girlfriends and this features a lot of double meaning dialogues and romance which will only attract the youth.

The performances of the lead cast were decent enough. Tejus is neat in his role and leads from the front. The guy who did the role of Bunty is pretty good as he generates decent comedy with his fun character.

Daksha Nagarkar looks natural and is very good in her role. Rahul Ramakrishna evokes decent laughs in his role of a frustrated software engineer. The bondage between the four friends has been showcased well.

The story of the film is quite old and has nothing new to showcase. You exactly know what is going to happen next after every scene in the film.

Even though Rahul’s role generates comedy, his character has been dragged in the second half with unnecessary scenes and cheesy double meaning comedy which makes you look at the exit door.

As one of the friend’s suffers from serious problems, the makers add certain comedy scenes which look a bit odd in such a situation. The climax is routine and does not create much interest as things end on a very simple and happy note all of a sudden.

Production values of the film are decent as the youthful atmosphere has been captured in a good manner. Music is below par except for Sid Sriram’s song and so was the background score. Dialogues have been written with a lot of wit. Editing is decent and so was the production design.

Coming to the director Sri Harsha, he has only concentrated on the fun part and left the emotions and drama completely. He falters with his narration in the second part and could have elevated the family drama even more. But he missed on it and made the ending pale and routine.

On the whole, Husharu is a routine youthful drama which has a few likable moments. The story of the film is quite old and has no novelty. Emotions wise, the film falters many a time but as it has some comedy which is strictly targeted at the youth, they can give this film a shot and the family audience can easily avoid the film this week.