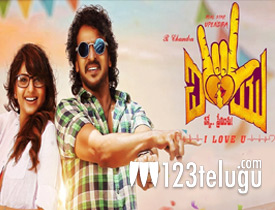 After a grief-gap, Kannada star, Upendra is back with a film titled, I Love You. Touted as a romantic drama, the film has hit the screens today. Let’s see how it is.

After facing a love failure in his college days, Santhosh Narayan(Upendra)comes out of his past and works hard to become a millionaire. Later, he settles down in life by marrying his relative Gowri ( Sonu Gowda). But one fine day, Santhosh gets a phone call from his ex-lover Dharmika (Rachita Ram) saying that she wants to be him. Why did Dharmika want to meet Santhosh again? What is her intention behind meeting him? What step will Santhosh take after meeting Dharmika? To know this, you have to watch the film on the silver screen.

Upendra is super fit and his styling from hair to costumes is good when compared to his previous films. His energetic performance during the college episodes bring depth to the proceedings. Upendra’s punch lines on contemporary love is showcased with nice dialogues. His performance in emotional scenes was natural.

Rachita Ram is cute in her story driven character and tried to portray the role to her best. Her acting during the love rejection scene in the flashback is decent. Sonam Gowda was apt in her role as an innocent house maker and did her role convincingly. All the artists, who acted as Upendra’s friends are okay. One romantic dream song which comes between Upendra and Rachita will attract the masses.

One of the major drawbacks of the film is that the conflict point is not addressed effectively. After an okay first half, the pace drops in the second half and the narration falls flat. Generally, films like these have a scope of more drama but sadly that was not utilized properly.

The climax episode and the realization scenes look a bit rushed up and lack the impact. Legendary comedian Brahmanandam was completely wasted as none of his comedy scenes work on the screen.

Director Chandru’s concept on showcasing a husband-wife relationship is nice but he could have worked on writing a fast-paced screenplay to make to proceedings even more gripping. Editing by Deepu S Kumar is decent as he tried to keep the run time within limits. Cinematography by Sugnaan and artwork by Mohan B Kere are apt for the film’s genre.

Choreography by Chinni Prakash is good as he composed stylish dance movements in the first song. Music is decent and so was the background score. Production values for this star hero’s film are adequate.

On the whole, I Love You is a contemporary story which shows the importance of husband-wife relationship. The film has a few typical Upendra mark dialogues targeting youth’s take on love stories in the first half. But the second half goes for a toss as the narration is dragged with ineffective screenplay. All those who love Upendra films can give this film a shot but the rest can take it easy.