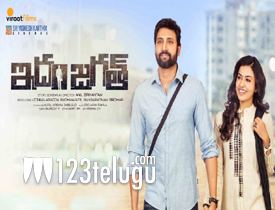 Sumanth’s Idam Jagath has been waiting for its release from a long time now. Directed by Anil Srikantham, this film has finally hit the screens today. Let’s see how it is.

Nishit(Sumanth) is a man who suffers from sleep disorders. Because of this, he becomes a reporter and starts shooting crime scenes. In this process, he misuses the footage and starts earning money. This is also the time when he falls in love with Mahati(Anju Kurian). As time passes by, Nishit shoots a murder scene and tries to make use of it for money. But to his bad luck, he gets entangled in an even bigger mess involving a big mafia set up. Rest of the story is as to how Nishit comes out of this mess and manages to become rich.

Sumanth gets a very interesting role which has a negative touch. He has done his best as a man who is hungry for money and can do anything for it. His performance in the second half was pretty good and it is good to see him accept roles with grey shades.

The interval bang and how the television channels manipulate news has been showcased in an interesting manner. Arjun Reddy fame Kalyan is neat in his negative role and does well in the film with good expressions.

Coming to the heroine Anju Kurian, she has done just an okay job in her role. Comedian Satya plays a sensible role and he is very good as the guy who does not like what the hero is doing. Shafi is also neat in his reporter’s role. Aditya Menon was okay in his small role.

One of the biggest minus points of the film is the love track which is not that impressive. Some very interesting crime scenes are obstructed by the love story and the way it is narrated does not create much impact.

Even though the heroine’s role is inserted well into the script, her character does not create much impact in the second half. The pre-climax is very nice but the manner in which the film ends looks abrupt and is not convincing and creates many doubts.

Certain drone shots are good and showcase the Vizag visuals richly. Production values are simple and cater to the story as the film mostly happens during the night time. Editing is crisp and so were the dialogues. Music is not that good and so was the background score.

Coming to the director Anil Srikantham, he makes a decent debut and proves he has talent. His thought process and the plot he chose are contemporary and look interesting. He narrates the crime scene quite well and shows promise in his narration. But if he had narrated the love story with better romance and kept it crisp without disturbing the plot, the output would have been even better.

On the whole, Idam Jagat has an interesting premise and is narrated well for the most part. Sumanth’s role with negative shades, contemporary media set up and how news is created for TRP’s look nice. But the disengaging love story obstructs the free flow of the film and sidetracks the film. All those who like crime thrillers with a realistic setup can watch this film and the rest can choose something else this weekend.