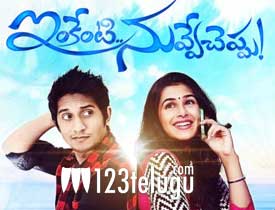 Noted producer, Malla Vijayandra Prasad, who earlier produced some good family entertainers has now come up with a small budget film called Inkenti Nuvve Cheppu with all newcomers. Let’s see how it is.

Sandhya(Aswini) and Shiva(Manikanta) are a couple who keep fighting to save their relationship. During their good days, they buy two mobile phones and use them only for their relationship purpose. One fine day, they get into a heated argument in a park and throw away both their phones.

The twist in the tale arises when Sandhya’s phone reaches Karthi(Prashanth) and Shiva’s mobile finds Neelu(Prasanna). As expected, a new romantic track kickstarts between Neelu and Karthi.

Rest of the story is as to how both these couples solve the confusion between each other and reunite together.

Senior actor Suman gives a settled performance as heroine’s father. Prasanth, who is showcased as an easy going guy is decent and impresses with his dances in the Google guru song. Acting wise, female leads Aswini and Prasanna are okay with their performances.

The second hero, Manikanta is natural and his expressions in the sad montage song that comes during the second half are quite good. Director Shivasri’s concept and dialogues are decent. Especially those written about technology misuse in the opening shot are impressive.

Director Shivasri, who chose a good concept has totally failed in the execution part. The up’s and downs in the screenplay will deviate you from the main theme of the movie. A song which breaks out during this time side tracks the film completely.

Lead heroine, Prasanna’s lip sink is so bad that most of the time we feel like watching a dubbing movie. The film has many unwanted and boring comedy scenes which are forced into the main track. Climax scenes are rushed without any proper flow.

Production values are good. The camerawork is decent and editing by Kotagiri Venkateshwara Rao is not up to the mark. Music by Vikas Kurimella is good. Three out of five songs are decent and hummable. Coming to the director Shivasri, even though he chooses an interesting plot, he fails in narrating the film in a clean and crisp manner which disappoints the proceedings completely.

On the whole, Inkenti Nuvve Cheppu is a film which has a good concept with some very bad execution. Being a youthful entertainer, this movie has some decent moments here and there. But the boring comedy and lack of engaging scenes will disappoint you and makes this film a strictly below average watch this weekend.