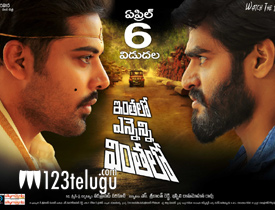 Actor Nandu’s latest film, Inthalo Ennenni Vinthalo has hit the theaters today. Let us check what this family drama has in store for us.

Vishnu(Nandu) is a polite guy who is very emotional about family relations. He falls in love with Vandana(Soumya Venugopal) but his love story gets disrupted by Vandana’s father as he finds out that Vishnu has cheated him in the past.

Meanwhile, Nandu meets Thaara(Pooja Ramachandra) who is neck-deep into problems. Vishnu takes it upon himself to save Thaara and gets into even deeper troubles. How will Vishnu save Thaara? Why did Vandana’s father hate Vishnu? Will Vishnu be able to win back his love? To know the answers, you need to watch the film on the big screen.

Nandu has evolved as an actor and comes up with a good performance. His maturity while emoting sentimental scenes add depth to certain scenes. The actor tries to keep things simple and stands as the backbone of the film.

Pooja Ramachandra gets a meaty role and she does well in key episodes. Soumya Venugopal has a very limited presence and supports the male lead well.

The movie runs at a good pace in the initial stages. The director handles the first 10-15 minutes well and manages to rake up excitement. The interval bang looks decent and sets a good platform for the second half. The way things unfold towards the interval plot has been executed well.

Gagan Vihari looks apt as the villain. He does well in a few key scenes in the movie and impresses with his natural acting.

The movie’s pace drops drastically after the initial 10-15 minutes. Not even a single scene connects with the actual storyline. The way hero and heroine fall in love is a total letdown as it lacks the intensity that is required to keep the viewers engaged.

The director tries to bring in comedy with a half-baked story and fails big time. The pointless comedy scenes further add to the misery of the viewers. Surprisingly, even the emotional scenes look very artificial and over usage of sentimental dialogues play the culprit here.

Things take a dismal turn towards the climax as the director simply tries to end the movie on a happy note. Lack of connectivity, poor narration, and pointless comedy have been stuffed to fulfill the runtime.

The director, Varaprasad Varakooti manages to extract the maximum from the lead cast. Here comes the bad part, he tries to provide an ample dose of comedy, emotions and family drama but fails to deliver anything even near to that.

The camera department did a fine job as a few scenes portray the hard work from the men behind the camera. The songs in the movie are just above mediocre. Sadly, the background score does not sync with the proceedings. Proper care should have been taken towards editing as a few scenes that run in the parallel track look a bit confusing.

On the whole, Inthalo Ennenni Vinthalo is an ill-paced family drama that has only a few good moments here and there. Good performances from the lead actors help this movie to an extent. With that being said, badly executed emotions, poor comedy, and illogical narration make this film a dull fare at the box office this weekend. Watch it only if you have nothing else to do.