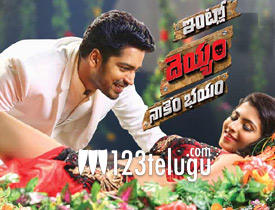 Intlo Dayyam Nakem Bhayyam is an important film for Allari Naresh. The horror comedy is directed by G Nageswara Reddy and has hit the screens today. Let’s see how it is.

Naresh(Allari Naresh) is a happy go lucky youth who enters the guest house of Gopal(Rajendra Prasad) which is possessed by evil spirits. He succeeds in impressing everyone as the fake Swamiji who has all the powers to deal with the evil spirits and collects huge remunaration for his job.

The twist in the tale arises when Naresh comes to know that the ghost is actually after him and is troubling everyone for the same. Rest of the story is as to how Naresh deals with his problem and saves everyone living in that guest house.

Allari Naresh is breezy with his performance and evokes good laughs with his funny dialogues. Rajendra Prasad, Pragati and heroine Mouryani give decent performances throughout the film.

Horror comedies have become a cake walk for Shakalaka Shankar and he, once again gives a top-notch performance in the first half. Chammak Chandra too, ably supports him and all their scenes with Naresh have come out well in the first half.

The story of the film is ages old and has absolutely nothing to offer. Once the twist is revealed after the first half, things become quite tedious as some forced comedy enters the proceedings.

The climax of the film is quite routine and ends with a predictable and dull note. Too many characters enter the film and try to evoke comedy which is a disappointment for the most part.

Production values of the film are decent and credit should go to the director for getting the casting right. Major comedy scenes only work out in the film only because of seasoned artists like Rajendra Prasad, Prabhas Seenu and Pragati. Music by Sai Karthik is good but sadly, the songs come in as speed breakers. Dialogues by Diamond Ratna Babu are written with a lot of wit and fun. Editing is decent except for the songs.

Coming to the director G Nageswara Reddy, he has done just an okay job with the film. Though he picks up a routine subject, he adds in good fun for the first half. But he too falters during the later part and introduces too many characters and dilutes the fun part.

On the whole, Intlo Dayyam Nakem Bhayyam is a routine horror comedy which you might have seen many a time. Having said that, the film has some good comedy episodes during the first half thanks to Allari Naresh and Shakalaka Shankar. All those who do not bother about the story line and are okay with the over the top and loud comedy can give this time pass film a shot this weekend.