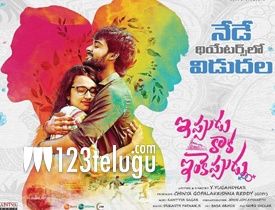 After a pre-release controversy, Ippudu Kaaka Inkeppudu, a romantic family entertainer featuring newcomers Haswant Vanga and Namrata Darekar in lead roles, released today. Let’s find out how this movie is.

Since their childhood, Gautam (Haswant Vanga) and Anu (Namrata Darekar) have been raised by their parents amidst many restrictions and in a traditional middle-class set-up. Gautam and Anu accidentally stumble upon an incident when they were in their teens. After they grow up, they go to Hyderabad for their respective jobs.

How do these youngsters, who grew up in a traditional set-up until then, enjoy the city culture? What were the difficulties faced by the two in Hyderabad? How did their lives finally turn out? You have to watch the movie to know the full story.

Ippudu Kaaka Inkeppudu has romance and emotions in equal proportions and also reflects the deep-rooted traditions in the society. Debutants Haswant Vanga and Namrata Darekar played the lead roles in the film. Hero’s dialogues in the climax are quite impressive.

Senior actor Tanikella Bharani suits his role well and also gives a good performance. Jabardasth actor Rocket Raghava evokes a few laughs with his one-liners. The rest of the actors have done justice to their characters.

Except for two or three scenes where Rocket Raghava appears, comedy is also shown in very small doses. Even though the twists in the movie are good, the way they are revealed in some places is not impressive. It would have been better if the climax had been given a better treatment.

The director’s story is good, where he tries to tell youngsters that parents can teach them values and traditions, and that it can sometimes cause problems in the lives of young people who are accustomed to modern culture. Production values of the film ​​are decent.

The dialogues are the main highlight of the film. Even the background score is impressive. Cinematography and editing are in sync with the narrative.

On the whole, Ippudu Kaaka Inkeppudu is an average love story laced with family emotions. Keeping the family audiences aside, the film might find some patronage of young audiences this weekend thanks to the picturisation of romantic scenes.