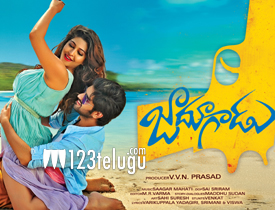 After impressing the audience with breezy romantic roles, young actor Naga Shourya is trying to unleash a mass avatar with his latest film, Jadoogadu. Directed by Yogie, this film has hit the screens today. Let’s see how it is.

Krishna ( Naga Shourya) comes to Hyderabad with the intention to earn money and settle well in life. He begins his career as a loan recovery agent and from there, he joins a gang run by Srisailam (Zakeer Hussain), who is a right hand to central minister Jagadeesh Naidu ( Kota Srinivasrao ). After a few days, he becomes the crucial member of this gang.

In the meantime, Krishna falls in love with Parvathy ( Sonarika), who hails from Kerala. She wants to settle in Dubai and convinces Krishna for the same. At the same time, Srisailam and Jagadeesh Naidu involve Krishna in a big deal without revealing the inner details about it.

So, how will Krishna face the consequences ? Will he be able to get out of the tangle and fly to Dubai with his love interest ? This forms the rest of the story.

Naga Shourya’s characterization is the major highlight for this movie. He has acted with good energy levels through out the film and his performance in the climax is a big asset for the film.

The last half an hour is decisive for this film. This is the time when the twits are revealed and the movie proceeds with a good pace along with some racy narration. Climax is well executed. Comedians Srinivas Reddy, Prudhvi and Ramesh did a decent job in their roles.

Apart from Naga Shourya, the remaining cast particularly Kota Srinivasrao , Zakeer Hussain, Ashish Vidyarthi and Ajay performed well and did justice to their roles. Sonarika’s glamour quotient is an added advantage for this movie.

The basic plot is a huge setback for the film. The predictable story line has been used in numerous movies earlier in Tollywood. Also, the logic in many scenes goes missing. Few unnecessary characters were included and the length of the movie becomes a tad too long.

After elevating the hero’s character in the first half, the director failed to continue the tempo in the second half. Many unnecessary scenes hamper the free flow of the movie. Naga Shourya’s character is not elevated much during the second half and lacks clarity.

The excessive run time of 150 minutes can be a dampener going by the current trend of movies. Saptagiri’s role looks cheap and goes overboard.

Debutante music director, Sagar Mahati gave superb music and his background score is a big bonus for this movie. Cinematography by Sai Sriram is OK. Every frame in the movie looked decent and a couple of songs were shot very nicely.

Director Yogie could have done a much better job. Although he dealt with the screenplay in a nice way, his plot is predictable and fails to make it interesting. Editing is below par as many scenes could have been easily trimmed out. The production values are pretty rich and the makers have not compromised in bringing out a quality movie for the audience.

On the whole, Jadoogadu is interesting only in bits and pieces. A few entertaining scenes in the first half and a well executed climax are the saving grace for the film. Even though, Naga Shourya proves his acting calibre with this film, the predictable story line and a lengthy run time spoil the flow of this below average action entertainer.