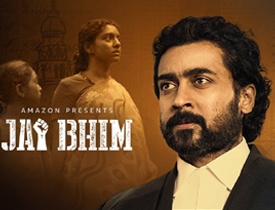 Suriya is doing some crazy content-based films in his career. Next in line is a courtroom drama called Jai Bhim which is now out on Amazon Prime.

The film is based on the life of a tribal couple Rajanna(Manikandan) and Chinnatalli(Lijomal Jose). A robbery happens in a wealthy man’s house and left with no choice, the cops frame Rajanna and his wife. Things become quite serious after a while as Rajanna absconds from the jail. A distressed Chinnatalli approaches a sincere lawyer Chandru(Suriya) to help her in the case. How Chandru goes all out and solves the case is the story.

Suriya once again picks up a content-filled story and excels in it. He as lawyer Chandru is dynamic and gives a realistic performance. Suriya showcases subtle emotions and never goes overboard till the end.

Lijomal Jose who plays the tribal lady is astonishing in her role. The way she portrays a helpless pregnant lady fighting for her husband is terrific. In the same way, Manikandan, who plays Rajanna is also intense. Be it his look or the way he showcases the pain in all the investigation scenes looks realistic.

Rao Ramesh is seen as a lawyer and he is quite powerful in his role. He speaks confidently and gives a solid fight to Suriya. All the courtroom scenes have been showcased in a very gripping manner. Though the rest of the cast is Tamil, they have given a very realistic performance.

The first half of Jai Bhim has similarities to the award-winning Tamil film Visaranai. The investigation scenes have the same flavor and take some time to enter the main plot.

The film is raw and serious. Because of this, those who look for commercial aspects from Suriya might be disappointed. The film is a tad lengthy and some scenes should have been chopped off in the first half to make things crisp.

The production values of the film are quite realistic. The entire courtroom is a huge set laid in Chennai and it looks amazing. The camerawork and how the tribal cast is showcased are pretty good. Music and BGM by Sean Roldan are just amazing. Telugu dubbing is also decent.

Coming to the director Gynanavel, he has done an amazing job with the film. He takes the real-life story of lawyer Chandru and showcases one of his best cases on screen. The way he adapts the screenplay with gripping narration is the highlight. The film shows how the lower castes are suppressed and keep you guessing. The pain that the tribal couple goes through is showcased in a moving manner.

On the whole, Jai Bhim is yet another feather in Suriya’s cap. It is raw, intense, and filled with gripping courtroom scenes. Though it takes some time to get into the main story and has no commercial aspects, the film has enough drama that will hold your attention until the end. A serious film that makes a perfect OTT watch.