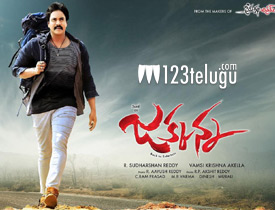 After the debacle of Krishnashtami, Sunil is back with yet another entertainer Jakkanna. Mannara Chopra makes her debut in this film which has hit the screens today. Let’s see whether this film gives Sunil his much needed hit or not.

Jakkanna(Sunil) is a happy go lucky youth who goes to any length to satisfy those who have helped him in the past. In this process, he sets his eyes on a dreaded gangster called Bairagi(Kabir Singh) who had saved his life during his child hood.

He starts targeting Bairagi and keeps irritating him with his good deeds. But these actions of Jakkanna start reflecting on Bairagi’s illegal activities and he in turn decides to kill Jakkana.

Rest of the story is as to how Jakkanna comes out of this tricky situation and where does Mannara Chopra feature in this entire set up.

The film has some time pass comedy in the form of Saptagiri and 30 years Pruthvi. Whenever they are on screen things light up and some fun filled moments are evoked. Mannara Chopra makes a decent debut with this film and does her role sincerely. Her dubbing suits her well but she had nothing much to do in the film. First half is okay and the interval bang is good.

Sunil, once again carries the film on his shoulders and tries hard to hold the grip. Even though the second half lacks direction, it is the comedy angle which keeps the audience entertained in bits and pieces. Especially, Saptagiri’s memory loss character is very good during this time. Kabir Singh gets a meatier role and performs to the best of his capabilities.

The basic plot of the film is quite dilute. It takes a very long time for one to digest the motto of the film and the way Sunil’s character behaves with his helping nature. The villain’s character which is quite a huge key to the film is shown powerfully during the beginning but as the movie progresses, it becomes a big joke for the audience.

With the lack of story line, characters keep jumping in and make things haywire. Screenplay goes for a toss during the second half as the proceedings deviate the film to a completely different zone.

One can easily get a feel that some comedy episodes have been forced to generate fun. Sunil looks out of shape and seriously needs an image make over as his choice of films are going no where.

Production values are very good as the film is showcased in a rich way. Music by Dinesh is pretty decent and the back ground score elevates the film quite well. Dialogues are very good and have been written with a lot of wit. Editing is just about okay and so was the art direction.

Coming to the director Vamsi Krishna, he has done a poor job with his direction. He starts off the film on a promising note and maintains decent suspense till the interval block. But once the film enters the second part, he makes things quite silly and just adds humour leaving the story and narration behind.

On the whole, Jakkanna is yet another routine commercial entertainer that you might have seen many a times in the past. Except for a few laughs here and there, this film has nothing much to offer. This film might find some audience in the B and C centres for the over the top fun it generates. But for the regular and family audience, it ends up as just a below average entertainer and can be given a shot only if you have absolutely nothing to do.